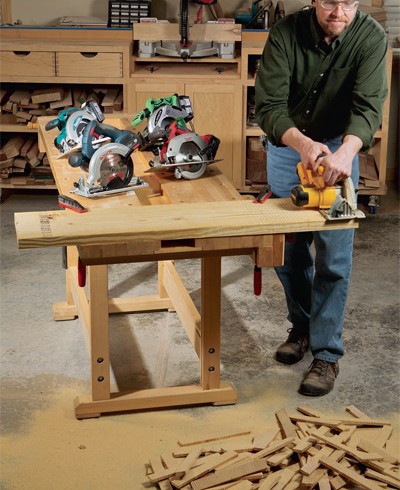 I can’t think of a single woodworker who doesn’t also do home repair. And, when my “shop” shifts to some far corner of the yard, cordless tools are essential.

In recent years, lithium-ion batteries have taken the cordless industry by storm. Truth be told, this leapfrog in battery technology wasn’t really intended for us hobbyists: lighter, longer running power packs matter most to the folks who make their livings building houses, running conduit and smashing concrete — it’s for the trades. But we all benefit … who wouldn’t rather take fewer trips back to the charger?

That’s why I expected top performance from these five 18-volt, pro-quality 6-1⁄2″ circular saws. These tools are built with punch lists and bottom lines in mind. And they delivered the goods in some tough cutting trials. I cut sheets of plywood to strips and made repetitive crosscuts on resiny, hard 2×12 Southern yellow pine. But, which “jobsite” saw edged out the rest for “Best Bet”? Read on! There are plenty of loyalists out there to DeWALT’s bright yellow color, and I’m sure this compact circular saw is toted in quite a few truck boxes. Its magnesium base and upper guard keep the tool light but tough, when those accidental drops occur, and a soft overmolded grip makes it comfortable in hand. I like the oversized flip lever and T-nut for changing cutting depth or setting up bevel cuts. They’re easy to grab with gloves on.

The tool’s single included battery also pulls free easily without taking your gloves off, by depressing two tabs. It charges in an hour, which is good, but other saws in this test with two power packs or faster chargers are more helpful for those really big cutting jobs. DeWALT provides a universal charger that will replenish either Li-ion or NiCad DeWALT batteries ranging from 7.2 up to 18 volts. This charger could cover all your DeWALT tools. Very practical.

A wide, marked slot on the saw base’s front edge makes it easy to determine where the blade kerf will hit your workpiece, whether making straight cuts or tipped to 45°. The bevel scale is stamped with demarcations for each degree up to 50; a swipe of black paint would make them even easier to read.

With its battery topped up to full charge, I was able to make 24 cuts across a quarter sheet of 3/4″ plywood, using a fresh Freud Diablo 40-tooth blade, before the battery was spent. Then, once it cooled and fully recharged, I swapped in a new 24-tooth Diablo framing blade and went to work on a 2×12. DeWALT made 36 crosscuts this go-round. A respectable showing but not the leader here by quite a stretch. For $269, here is a no-frills, get-it-done saw. When UPS delivered this sample from Bosch, I was surprised at the small carton size. Turns out, that’s because Bosch doesn’t provide a hard carry case or a duffel bag for stowing this tool, unlike the other four test saws. Odd.

The saw’s standard features were a mixed blessing for me. It has comfortable overmolds on the top and front handles, and the primary grip is tilted back farther vertically than other saws to suit a more natural wrist position. I found the machine to be well-balanced, and it has a large safety lock button alongside the trigger for easier startups with gloves. There’s also a helpful depth-of-cut indicator in back so you won’t need a tape measure to set cutting depth. All good.

The bevel tilt scale, though, isn’t as detailed as DeWALT’s — demarcations at 5° increments only — and the two blade index slits in front should be marked in some fashion. They aren’t, so you’ll need to double-check by referencing the blade and slits instead of just looking down and lining up the correct notch with a layout line. It’s less helpful but something you’ll probably adapt to in a few cuts.

A single battery comes with this tool, and it charges up in just 30 minutes, which you’ll appreciate if there’s lots of cutting to do. I’d still rather have two batteries and a quick charger. Removing the power pack involves pushing a rear button while sliding the pack backward. It wasn’t as easy for me as packs with two side tabs and a pull-down release.

Depth of cut, tilt and arbor lock controls are amply sized, and the magnesium base is ribbed on the bottom for lower resistance when pushing the saw over rough surfaces.

Once charged up and outfitted with appropriate Freud blades, the CCS180K made short work of 30 passes across 24 inches of plywood. It bested DeWALT by six more crosscuts on a 2×12, before the battery dropped off to sleep. And, the saw had plenty of power throughout.

All in all, $299 seems steep for a tool with one battery and no carry case, but you can buy this saw as a “bare” tool option if you already have other Bosch 18-volt Li-ion tools. For ten bucks more than Bosch, Hitachi packs in added features for the money. You get two 3.0 Amp/hour (Ah) batteries, a hard case and an edge guide for making accurate rip cuts. When you hit the trigger safety, the C18DL also sports a light to illuminate the blade area. Call it a sign of aging, but I really appreciate well-placed task lights on tools. And, even though it isn’t a long-lasting LED, the bulb is replaceable.

Hitachi never skimps on overmolds. This saw is fully wrapped on both front and primary grips with elastomer for sure handling and comfort. These grips are also amply sized for large hands, and I found the main grip’s pistol styling to be my favorite of all.

Hitachi’s fan-cooled charger will rejuvenate either Li-ion or NiCad batteries ranging from 7.2 to 18 volts. The charger’s illuminated display is a bit counterintuitive: a constant green light means the battery is actually overheated, while blinking red tells you it’s fully charged. Still, the process takes just 45 minutes while you’re busy sawing with the other pack.

Hitachi outfits the C18DL with a black, stamped-steel base, which is fine, but don’t drop the tool. Steel bases are more likely to bend out of shape. Two front cutouts set the index markers for lining up the blade, but my test saw cut 1/16″ to the “keep” side of the layout line, thus leaving workpieces a kerf width short. It can’t be adjusted.

In the cutting test, Hitachi was mid-pack all the way, producing 27 plywood cuts and 42 crosscuts in 2x with each charge. Sawdust ejection was messier here than some other saws, with more debris left on the workpiece. But, overall, this green machine performed pretty well. I think $309 seems a decent deal, and there’s a “bare” option for about a third of that price. With more than 60 different cordless tools in its inventory, Makita is heavily invested in pro-user options these days. And for those who want good performance without the bulk, this BSS610 is lightweight and is smaller in overall stature than these other saws.

A bright, white LED lights up the blade when you lightly depress the trigger, and the base’s blade indexes are clear and accurate. Depth of cut is also easy to dial in, thanks to a series of common blade depths molded into the lower guard. Flip-lever controls for tilting the base or changing blade depth are smaller here but still easy to manipulate.

Makita’s NiCad/Li-ion universal charger, which powers batteries back up in 30 minutes, has an elaborate diagnostic display and a fan that draws air through the packs during charging to minimize heat buildup. Heat is the bane of tool batteries.

In testing, Makita came up a tad short on plywood cuts at 23, but that’s still the equivalent of ripping almost six sheets lengthwise on one charge. It delivered 40 crosscuts on a 2×12 before the motor finally stopped.

Two batteries, an edge guide and carry case all are provided for the same price as Milwaukee’s contender, next. Milwaukee boldly describes itself to be “Nothing but HEAVY DUTY,” and after testing the M18 (Model 2630-22), I can see why the pros might agree. While it’s a tad heavier than others, this saw features a thick, aircraft-grade aluminum base with oversized scales and a clear, easy-to-read tilt scale. Control levers are generous, and overmolded handles provide good control. Two proprietary RedLithium batteries come with it, and they have helpful illuminated readouts to show you their charge levels at any time. A universal charger with two battery mounts refreshes 12- or 18-volt Milwaukee batteries in an hour. A duffel bag stows the works, plus a steel edge guide.

Aside from this saw’s rugged features, it simply left the competition in the dust during cutting trials. The 2630-22 sliced 38 cuts in plywood before I switched batteries, then it chomped an impressive 53 crosscuts on 2x before the battery could go no further.

With the exception of less-than-tidy sawdust ejection, which could be improved, the saw was a robust and pleasant tool to use. There’s something special about RedLithium technology, and it provided long-running endurance here. Given its performance and good features, while priced competitively with Makita, it deserves our “Best Bet” award … and your consideration at buying time. It’s a great saw.

Using Your Table Saw as a Jointer

You might also like:
Straight Cutting a Curved Edge Board
How to Use a Mortising Chisel
Make a Table Saw Zero-Clearance Throatplate
Cutting Rough-Edged Stock on the Table Saw