In last week’s editorial, Rob mentioned that Minnesota was experiencing a heat wave – and that he would be spending more time in his air-conditioned shop, and less time in his non-air-conditioned home. Several readers understood the priorities – at least up to a point. – Editor

“It makes a lot of sense to have the a/c in the workshop. After all, you want your wood to stay at the proper moisture level. I just have one question: is your new wife a woodworker or are you leaving her to fend for herself?  It might be better for your health to sweat it out with her if she’s not spending time with you in the shop.  Otherwise you may come home to a garage sale of stuff you didn’t want sold.” – Mike Grawvunder

To Mike and all the other readers: Rest assured that Rob’s wife makes sure she is not left sweltering in a hot house while he is in a cool shop. – Editor

In response to last issue’s question on finishing with shea oil, we heard from a reader with some insights on a different kind of “oil”: jojoba. – Editor

“In your July 19, 2016  issue you published Chris Marshall’s piece about shea oil as a wood finish and suggested polyurethane as the preferred finish for a dining room table because of its resistance to scuffs and spills. Good advice. Please note that there is one entirely natural finish (no toxic ingredients) of which most woodworkers are not aware: 100 percent pure jojoba (pronounced ho-ho-ba, like a grumpy Santa Claus).

“Pure jojoba is a liquid wax ester; it has an indefinite shelf life.  The seeds from which it is pressed are edible — although there are better things to eat! You will often see jojoba described as ‘jojoba oil.’ That’s a misnomer and does a huge disservice to the nature of the product. In fact, jojoba is the closest thing to human sebum they’ve found in the plant world. Sebum is that restorative fluid our sebaceous gland produce to keep our skin healthy. You don’t need to worry if you get jojoba on your skin. It’s actually good for you. And, you don’t have to throw away the rags you use to apply it. Wash them out with hot water and soap, and use them again.

“Jojoba is commonly used as a multipurpose personal care product (skin, scalp and hair), but it’s got a whole host of other uses, as well. Ever pulled the label off a container and had that tacky glue residue to get rid of? Jojoba gets rid of it. Ever wanted to keep your tools from oxidizing? Jojoba is an antioxidant.  You should clean and store every tool you own with it. Ever wanted to spruce up a leather shoe or boot? Use jojoba. Do you have or make wooden toys your children or grandchildren play with? Yep. Jojoba is perfect for finishing those, too.

“We’ve finished all of the posts and beams of our barn with pure jojoba. It brings out the grain of the wood and preserves the wood beautifully. If it’s NOT a piece of fine furniture you’re finishing, but a more rustic presentation, then jojoba works great and is far safer than the toxic stuff the industry has been recommending for millennia.

“Unrelated to woodworking, but good to know nonetheless, I put a 250ml bottle of jojoba in my engine with every oil change. My truck has close to 200,000 miles on it. Still chugging.

“The best source for pure jojoba is The Jojoba Company d/b/a The Original Jojoba Company. They’ve been in business for more than 20 years, and the only product they provide is pure jojoba. They know their stuff.” – Bob Butler

And another reader appreciated one of the Free Plans on offer. – Editor 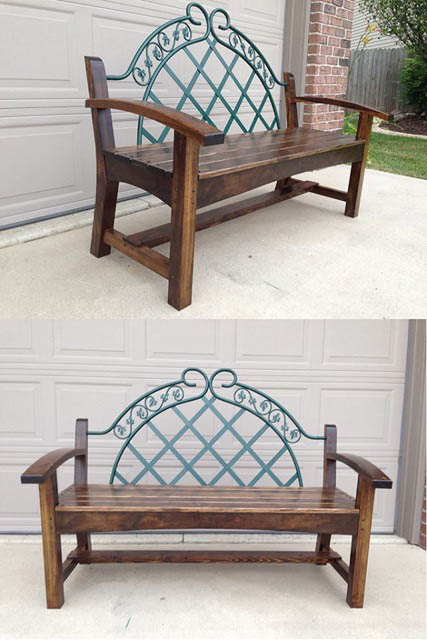 “I was just looking through today’s edition of the Woodworker’s Journal eZine email and couldn’t help but notice the Hoopback Garden Bench. Naturally, I had to download the plans. Here’s why…

“Just two weeks ago, I finished my own version of the Hoopback Garden Bench. Where, oh where, were these plans back then? You see, some time ago, I promised a friend I would make her a garden bench. Not long after, I found a decorative metal, queen-size bedframe for sale on Craigslist. It had matching head- and footboards that I felt would make great backs for a bench. I searched the Internet for over a month trying to find plans for a bench that would fit the style of the headboard. Almost ready to give up, I finally found a Sketch-Up drawing of the Hoopback Garden Bench…no instructions, just a drawing. I downloaded it, and the program, and struggled through trying to figure out dimensions, joints, etc., and how to modify it to accept my headboard.

It was a long, difficult endeavor, but I finally finished it — like I said, two short weeks ago — and delivered it to my friend, who accepted with tears in her eyes … which of course, brought tears to my own. I’m enclosing a photo of the finished product.

Yes, I sit here wishing you had posted this two months ago, but that’s OK. I’ve downloaded and saved it anyway, because there’s still the matter of that footboard … you see, my wife wants a bench now, too. I think I’ll take a short break from benches and make a few other things …some easier pieces. But, when I get back to it, at least now I’ll have some plans and instructions to help me along the way!” – Dale Boyer