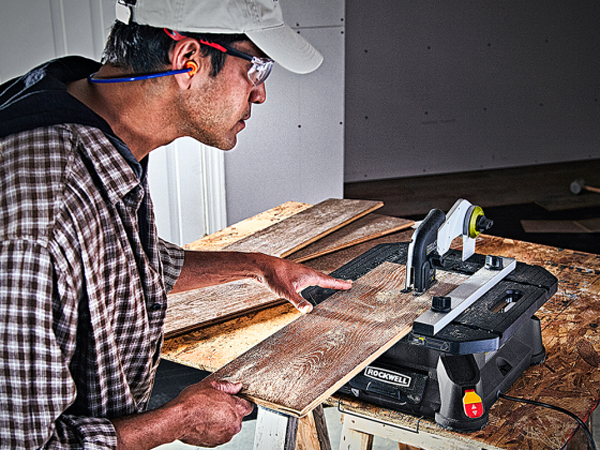 I’ve got a lovely old 24-in. Rockwell-Delta scroll saw, dating from somewhere around 1957. It’s a wonderful machine, with tilting table, built-in air blower and worklight — and it has variable speed, by means of an adjustable V-pulley system. My favorite feature, though, is its ability to use either regular scroll saw blades or jigsaw blades. Pinned blades are no advantage, since the blades are held in place by a simple thumbscrew clamp on top and bottom. The jigsaw blade is obviously stiffer, so it can be used without the top support, making it possible to make inside cuts without having to remove the blade. I love the saw, but it’s big and heavy, and I wonder if there is a modern equivalent (one that can use either type of blade). I don’t believe I’ve ever seen one. – Steve Dickerson

Tim Inman: Keep that saw! While I cannot say with any authority whether there is a modern equivalent to your good old saw, I can say with complete confidence that whatever might be available in the open market today will not be anything like what you have — and not even close for the money you might spend. If your ugly old saw is annoying you, my best suggestion is that you invest in some spit and polish. Shine it up; paint it. Rewire where appropriate. But KEEP THAT SAW. I use an ancient Crescent brand jointer in my shop most of the time. It is an 8-inch jointer. The blades are set at an unusually low angle and the cutterhead runs in oil-bathed Babbitt bearings. The jointer was made to run on a flat belt driven by an overhead belt system in the early 1900s. I have converted it to a V-belt running on an old but more modern electric motor. The two tables show the marks of hand planing on the metal to be sure it was flat and true. Both infeed and outfeed tables have really elegant adjustments in two planes, not just in one plane as the modern tables are adjusted. They even have dovetailed wedges to accommodate for wear. I got this jointer from a church furniture company that closed in the 1980s. Their foreman told me they had taken the jointer from the Beloit Wagon Company in Beloit, Wisconsin. It was originally used to make wagon tongues. No modern replacement machine would come with the stories I have about this machine. And darned few can match it for cutting quality and accuracy, either. I like old machines.

Rob Johnstone: I am not aware of a machine that uses both kinds of the saw blades that you talk about. Rockwell has a tool they call the Bladerunner X2® Portable Tabletop Saw that uses a jigsaw blade (see it pictured in both of the photos here), and it does so in a very similar way to what you describe with your saw. It is not heavy at all (less than 15 lbs.) but as far as I know, it will not use a traditional scroll saw blade.

Chris Marshall: I think a big and heavy, but uniquely versatile, old scroll saw sounds great, Steve. You have a gem of history there. Glad to hear it’s still going strong!