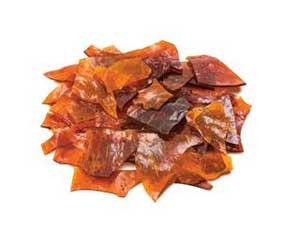 The suggestion to use shellac for a baby crib raised a question in my mind about the production of shellac. I know that it is a product of the lac beetle, but are these beetles raised commercially for the shellac industry? How is the shellac harvested? How many beetles are required to satisfy worldwide demand for shellac? This question is probably not down your alley, but I’ll bet you know where the answer is to be found.

Michael Dresdner: Actually, it is indeed down my alley and is one of the subjects I have spent years studying. Sit back, relax, and I’ll tell you the shellac story.

Shellac, like silk, honey, and beeswax, is made by bugs, not of bugs. Laccifer lacca, a small insect about the size and color of an apple seed, swarms on certain trees in India and Thailand. Like most bugs, it eats during its larval stage, then settles down and creates a sort of cocoon in which to mature. In this case, the bugs create a huge, hard, waterproof, communal protective shell on the branches of the trees they live on. Soon, the adult males emerge from the shell and fly away. The females do not fly — they attach permanently to the tree and stay there.

Once the males have gone, natives collect the branches and scrape off the hard crust. This gets crumbled into what we call “seedlac.” Seedlac is filtered to remove any random bits of bark and bug legs to make shellac. Along with the resin we use as a coating, shellac contains varying amounts of a natural dye, which is why shellac comes in different colors. The dye color varies with the season of the year and the type and geographical locale of the tree, and ranges from dark black “dreg” shellac to almost crystal clear “platina.” It also contains about 5% wax, which it is believed is from wax “breathing tubes” the larva create in the shellac shell. In the course of processing shellac, we sometimes remove the wax (to make dewaxed shellac) and also filter out or bleach out some or all of the color (to make clear or blond shellac from the more common orange shellac.)

The locals keep a certain percentage of the branches intact, specifically those with high concentrations of live female lac bugs. These are tied onto other, uninfected trees so that the next generation of lac bugs produced by the female will have something to eat. It also limits the damage to any one tree, thus making the whole system endlessly cyclical. In this way, you could say that the lac bug is “raised commercially,” though other than moving them to new trees, nothing else is needed. Beetles, like the lac bug, tend to thrive without our help, as anyone with a cockroach problem will certainly tell you.

As for how many beetles are needed, the answer is “fewer than there are.” To the best of my knowledge, the world-wide demand for shellac has never exceeded the supply, and my sources tell me it is not in any danger of doing so now.

You didn’t ask, but since I’m on a roll, I’ll add a few more shellac tidbits. Most shellac today is used by the food and drug industries as coatings for food, fruit, candy, vitamins, and medicine. One of its more interesting uses is in time-release medicine. Shellac is thoroughly impervious to acid, but breaks down in alkaline (basic) solutions. Imagine if you coated half the medicine in a tablet with shellac. Your mouth and stomach are acidic environments, but your intestines are alkaline. The uncoated medicine starts dissolving immediately in your mouth and stomach, but the coated portion only starts to work after it makes its way down into your intestines, some time later. Hence, time-release medicine.

Chances are good that you have eaten shellac. Many common candies, such as Whoppers malted milk balls, Raisinettes, Junior Mints, and lots of Easter candy are coated in shellac to make it shiny and prevent the candy from sticking together in the bag. If you are curious whether your favorite candy is coated, look on the ingredients list, but don’t look for the word shellac. In the candy industry, it is called confectioner’s glaze, food glaze, or confectioner’s resin.

In the dim past, shellac was harvested not for the resin we know, but for the natural dye I spoke of. Because true red dyes were once very hard to come by, shellac dye (which is red) was quite valuable — vastly more valuable than the resin, which was little more than a byproduct. It was so valuable that one large shellac processor, Angelo Bros., saw fit to build a huge new processing plant in Calcutta in 1855. That was a masterpiece of bad timing. One year later, in 1856, a guy named Perkins developed the first synthetic aniline dyes from coal tar, which for the first time in history made red dye cheap enough so that it was no longer practical to extract it from shellac.