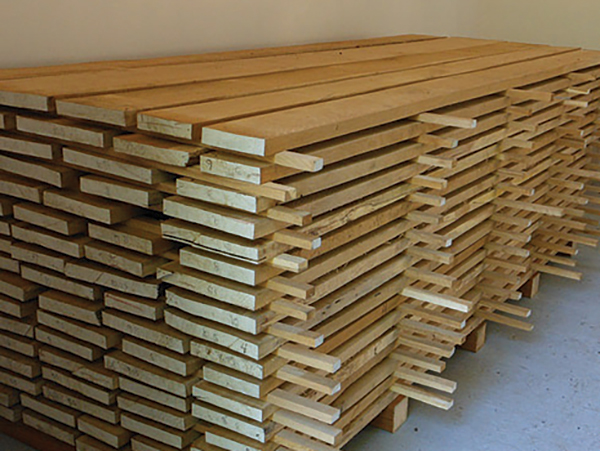 I left some milled four quarter maple in a basement shop in New England during the winter with the heat off. Upon my return, the boards were no longer flat. Could repeated warming and cooling of the shop air have played havoc with my lumber?

T. C. Knight: More than likely, the cause of the warping was incorrect handling of the boards. A cold, humid basement should have reduced the chance of warping because it slows the drying rate. Wood warps as it dries due to the stresses applied as the outer area dries while the interior of the wood is still moist. To reduce warping, wood should be stacked and dried correctly. Stack the boards on a level floor with space between them and the concrete to allow air circulation. Three-quarter-inch strips of wood, called stickers, should be placed about every two feet along the stack, separating one layer of boards from the other and the bottom layer from the floor. Once the stack is complete, heavy objects such as cinder blocks should be placed on top to evenly weigh the top layer, holding it flat.  Some boards, however, are prone to warp no matter what you do, especially if they came from a leaning tree containing compression wood.

Andy Rae: Any milled wood in any woodshop, left standing or lying horizontal, will warp. How much depends on the moisture variances in your particular shop. Regardless of location, if you’ve milled your wood flat and must go do something else other than join it in the form of furniture, stack it on a flat surface with weight on top.