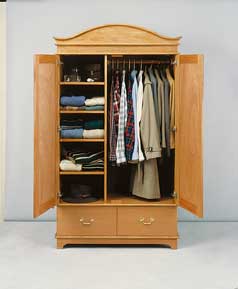 We are living in and renovating a farmhouse built in 1877. Apparently there was limited access to levels or plumbs and closets were something you brought with you, not something you built into the bedroom walls. What’s the difference between an Armoire and a Chiffarobe? I will be building a few of these to maintain the historic look of the house. I will need as much space as possible. (There’s a wife and a daughter … both of whom love clothes and see no need to cycle or recycle them at all.) Can you help me? – Joe Wampler

Joanna Werch Takes: Ah, the mysteries of language. Both an armoire and a chiffarobe fall into the general category of a “wardrobe”: “a large piece of furniture where you can hang your clothes,” according to the Macmillan Dictionary. You will remember, of course, that Lucy enters Narnia by walking through the fur coats hanging in a wardrobe in the appropriately titled The Lion, the Witch and the Wardrobe, the first book in C.S. Lewis’s Chronicles of Narnia series.

So, was C.S. Lewis thinking of an armoire or a chiffarobe?

The latter is extremely doubtful — particularly since the term “chiffarobe” is used mainly in the American South, where it refers to a particular kind of wardrobe furniture: the kind that combines the long hanging space for clothes with a chest of drawers. Sometimes there are doors that enclose both sides; sometimes the door just covers the hanging clothes part.

The word “chiffarobe” combines two other words for furniture. One of them is “wardrobe.” The other one is “chiffonier,” a tall and narrow chest of drawers, sometimes enclosed behind doors. The direct translation from the French is “rag-gatherer.” One assumes that your wife and daughter’s clothes are somewhat better than rags, but hey, those 19th century people stored whatever they wanted to in those things.

As for “armoire,” it’s also a word with French origins, originally referring to a place to store your tools, or your arms (think knight in shining “armor” days, swords, etc.). You could, these days, build an armoire to store your woodworking tools — but your wife and daughter might get a little resentful if they’re still waiting on their closet space. The first storage armoires were chests, but ye olde knights probably put on a few pounds after their jousting days, and stuff just didn’t fit into anything but a taller, freestanding closet, so the “armoires” grew.

These days, you could add shelves, or drawers, to your armoire, but it’s not required (and if you create a bank of drawers next to your hanging space, you’ve just turned your amoire into a chifforobe). Much like in fashion, where there’s no longer any annual ruling on what length skirts should be, you’re on your own to figure it out. And that’s probably where you should start: have your wife and daughter take an inventory of their wardrobe to figure what they’d want to store in a wardrobe – and then you can determine which kind would be the best fit.

Tim Inman: The differences in definition between armoire and chiffarobe can be obscure, and individual: tomato [to-may-to] or tomato [to-mah-to]? There is a historic difference, but it may be irrelevant for your needs here. My best advice as for plans is this: Make a trip to a good museum and use your eyes. Take a sketch pad. Many museums will allow you to take measured drawings and/or photos (flash should be discouraged). Or, head out to IKEA, and get the cabinet you want — then design your own “antique” version of it. There are plan books, too — but it isn’t as much fun to build them as my way.