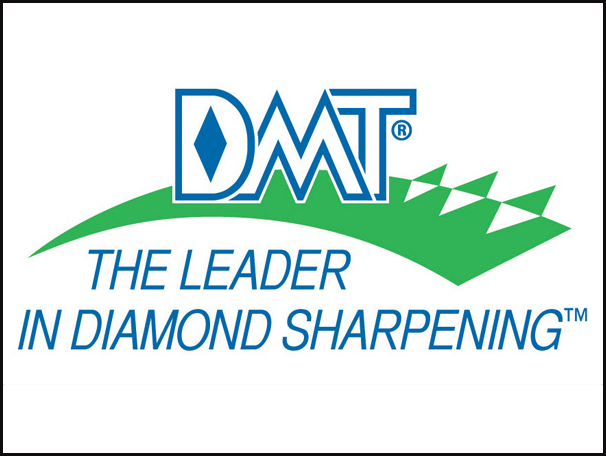 If you’re already a convert to sharpening your tool edges and other cutters with diamond-coated stones, you know the virtues: diamonds sharpen faster than other options, the plates don’t need to be periodically flattened, and they outlast natural oilstones or synthetic waterstones by a good measure. And if your diamond stone is punctuated by a polka-dot pattern on both faces, chances are it’s one of Diamond Machining Technology’s (DMT) DuoSharp® Diamond Bench Stones. That product line is celebrating its “Sweet 16” anniversary this year. It’s become one of the company’s most popular sharpening options for all manner of straight edges — plane irons, chisels, molding knives, router bits and other types of knives. But plate-type diamond sharpeners weren’t DMT’s first “bread-and-butter” products when it was founded in 1976. Those came about almost by happy accident. At the time, DMT made diamond grinding wheels with a dotted pattern of recessed holes for polishing hard surfaces, such as granite and concrete. The holes enabled the wheels to cut more effectively than continuous-abrasive wheels, because grinding debris could clear itself away rather than clog up the abrasive.

The market for those wheels was on the decline, so the company was looking for new product applications. Matter-of-factly, the center punch-outs of those wheels — a byproduct of the production process — were used by DMT employees already as flat sharpeners. “They made terrific, if somewhat unorthodox, knife sharpeners,” recalls Mark Brandon, DMT’s president. “That gave someone the idea to approach L.L. Bean with the concept.” The Maine-based outdoor clothier and gear supplier was not a DMT customer at the time.

As the history goes, L.L. Bean was enthusiastic about the performance of DMT’s polka-dotted punch-outs, but they advised that in order for the sharpeners to be recognizable to their customers as whetstones, DMT would need to change the shape to rectangles. DMT complied, and that’s how its 6 x 2-in. Diamond Whetstone™ got its start: from a manufacturing cast-off to the forefather of its entire diamond-plate product line. The success of its Whetstones encouraged DMT to develop its family of double-sided DuoSharp Stones. Like the Whetstones, DuoSharp features the polka-dot pattern of particle-sized diamonds, which cut steel cleanly and efficiently. They don’t require oil or water as a lubricant to carry the metal fines off. Instead, debris falls into the dotted pockets and enables the diamonds to keep on cutting.

But aside from the punctuated pattern of the cutting plate, Brandon says the real key to the cutting efficiency of DuoSharp and other DMT flat stones is the grit size, consistency and coverage of its diamonds. “We use only monocrystalline diamonds in the widest range of grits available — from 120 to 8,000 mesh. And, they are just what you imagine: a single diamond crystal each. This structure has been shown to be much less prone to fracturing than polycrystalline diamonds, which have the advantage of lower cost but are less durable.”

“You can visualize this by imagining fine grits as golf balls and coarser grits as softballs or basketballs. Clearly a basketball on a surface of golf balls will not give you a consistent scratch pattern.” Tough, same-sized diamonds cut well, but you need a lot of them to make a fast-acting, durable sharpening stone. Brandon says DMT’s substantial coverage is one of the reasons the company is recognized as a premium diamond sharpener. DMT stones feature more diamonds per square inch than any other manufacturer in the industry, the company reports.

DuoSharp Diamond Bench Stones have 10 x 4-in. or 8 x 2-5/8-in. plates with a yellow resin core. The diamond-coated steel plates on top can simply be washed clean with water between uses and never need flattening or other maintenance. Their two polka-dotted faces come in four different grit combinations: coarse/extra-coarse, fine/coarse, extra-fine/fine and extra-fine/coarse. “(The body) is a reinforced polycarbonate with ideal strength, toughness and stability properties. And the bright yellow color makes it easy to find in your shop!”

DMT’s Diamond Whetstones have one sharpening face. They come in with 8 x 2-5/8-in. or 6 x 2-in. plates in several grit options.

The company also makes Dia-Sharp® flat stones in several sizes with a continuous, rather than interrupted, diamond surface. Most of the Dia-Sharp options are single-sided. DMT also makes single- and double-sided Dia-fold® folding diamond sharpeners, as well as Mini-Sharp® stones that are easy to carry in a pocket, tool bag or tackle box. So, which style of diamond stone best suits the sharpening needs of woodworkers and DIYers? That determination, Brandon says, is unique to each buyer.

“The choice of sharpening surface is a very personal preference. Each surface has its own tactile feedback and technical advantages. For example, the interrupted surface is faster and needs less frequent cleaning, while the continuous surface is easier to use with more pointed tools. After that, of course, is price, and DMT offers a wide variety of sizes to meet any budget.” For those readers who use WorkSharp power sharpeners, DMT also makes diamond-covered replacements for WorkSharp’s paper-backed abrasive discs. DMT calls it the Magna-Disc™ Sharpening System. It consists of a series of steel discs with various diamond grits that attach to WorkSharp’s glass plate, using a magnetic disc. Once the adhesive-backed magnet is installed, Magna-Discs are quick to swap on and off the sharpener, because magnetism holds them in place instead of adhesive. Unlike paper-backed abrasives, the discs don’t rip or trap air pockets underneath, either, and Brandon says they’ll last about 50 times longer. That can result in a significant cost savings over time.

Magna-Disc steel plates also act like heat sinks to draw heat away from the tool edge being sharpened, which helps preserve the steel’s temper and edge hardness. “Paper discs can heat tools up to 210° F and even higher,” Brandon says, “while DMT’s diamond discs do not exceed 90° F.” Whether it’s a DuoSharp Stone, Whetstone, Dia-Sharp product, Magna-Disc system or otherwise, all of DMT’s inventory is manufactured in its Marlborough, Massachusetts, factory. Most of its sources for raw materials and services are U.S.-based, too. Brandon says DMT’s “Made in America” pledge not only keeps quality high and allows the company to collaborate easily with its stateside sources, it also ensures that DMT products continue to bolster the economy as an export commodity.

That fact is significant. In 2014, DMT was recognized with the “E” Award by President Obama and the U.S. Commerce Department for its export performance. In 2012, DMT also received a Global Trade Award from the Associated Industries of Massachusetts International Business Council (AIM-IBC). Stateside manufacturing also proved prudent for the DMT during the recent West Cost port strikes, which hampered the traffic of Asian-made goods. “(We) continued to ship on time while other suppliers’ products languished dockside or on ships out on the ocean waiting to be unloaded,” Brandon says.

Regardless of where DMT’s products may be shipped, woodworkers near and far are some of DMT’s key customers. Brandon believes woodworking is all about continual innovation. He’s proud that DMT’s sharpening products can support this tradition’s new and changing ideas.

“We try to let that spirit inspire us to develop and manufacture sharpening products that meet the evolving needs of today’s and tomorrow’s woodworkers … (We believe) in the future of woodworking, and we hope to be part of it for a long time.”

Learn more about DMT’s DuoSharp Bench Stones and other products by clicking here.