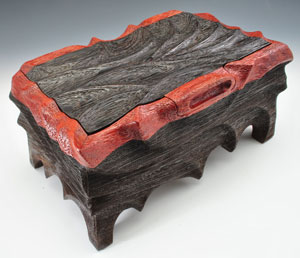 When Greg Little retired, “I wanted to build smaller projects, something that I could pick up and carry,” he said. “Boxes are a piece that I’ve always liked.”

Although Greg’s main focus is now on boxes, in the past he has been a builder of wooden yachts and sailboats, as well as furniture. He’s also a frequent contributor to the Reader’s Project Gallery section of the Woodworker’s Journal eZine, sharing a variety of his projects.

“As long as I can remember, woodworking is something I’ve really enjoyed doing,” Greg said. He started out at around age 9 or 10, watching his dad and uncle build pirogues in the garage. The small, flat-bottomed boats could more easily navigate the marshes and shallow waters of Louisiana for the family’s hunting and fishing interests.

“I’d go out there and just be fascinated by what they were doing,” Greg said. “They’d teach me little things, like ‘Here, take this hammer and do this.'” Thatexperience, plus his participation in soapbox derby building as a young teenager, led him to making woodworking a lifelong pursuit. “I’m fortunate that, from an early age,” he realized what he enjoyed, Greg said. During the years of building larger boats and furniture, Greg kept in the back pocket of his memory a late 1960s visit to a box maker from the Gatlinburg, Tennessee area. “He was doing nice sculpting and carving, and it stuck with me,” he said. As Greg pondered ideas for woodworking opportunities in his retirement, he knew he wanted something that could be put together fairly quickly and something people could use. “With boats, I could spend up to a year on one project. With the boxes, it’s a couple of days. I like seeing fast results from my work instead of a long, drawn-out project. I also wanted to do something a little different. I remembered Gatlinburg, and experimented in my workshop.”

These days, that’s “a really nice shop,” 24 x 40 feet and two stories high, that he built on the land he and his wife, Carol, purchased in Prairieville, Louisiana. They moved there after their New Orleans home was destroyed by Hurricane Katrina. Back in New Orleans, Greg had his shop spread out among a one-car garage, a carport, and a storage shed he shared with the lawn equipment. “Katrina flooded the house, and wiped out everything,” he said. “Before Katrina, I had tools that went back to my dad, and some old, old tools I had restored. When New Orleans was underwater for three weeks, that destroyed anything past keeping.” The tools he uses the most in his new shop, with its focus on box making, are his angle grinder and a Foredom® flexible shaft power tool. “I visualize the design I want to use and hand draw the design on a page. Then I do my best to draw it on the box once I have the design. I take my angle grinder, and take the excess wood out with the angle grinder, then use a Foredom tool. After that point, it’s lots of hand sanding.”

Greg’s boxes have lots of curves and compound carvings, and he’s not aware of a machine that allows him to send to the level he wishes, so “I just wrap sandpaper around my finger and start following the grain to remove the sanding marks. Hours on end of sanding is what it takes to make it work.” Greg admits that might not be everyone’s cup of tea: “One of the things all my life I’ve heard people say is, ‘I do not like to sand.’ If there’s something you do not like to do, it’s going to show up in your work, and be the weak link in the chain. So I just look at sanding as a nice, relaxing time.” Part of the reason Greg needs to concentrate so much on sanding is the amount of compound curves on his boxes. “I like to have curves flow from the tip of the box to the side, and have acontinually wrapping curve all the way around the box,” he said. “A lot of compound curves came from the days I worked on boats. On boats, nothing is perfectly square, and you get an interesting continual flow.” Also, “everything in nature is pretty much constantly flowing: nature does not build a lot of squares. I like to put a continuously changing design on a piece of wood with continuously changing grain.” One of his favorite woods to work with, for instance, is sinker cypress: lumber that came from logs that fell off transport barges during the logging operations of the 19th century, and sank into the mud. “That wood is aged and weathered, like old rock formations in the Grand Canyon, eaten away by time and weather.

“When I go to shows, I like to go to lumberyards and sort through and look for exotics,” Greg said. “There’s so many beautiful woods in the world, and boxes give me a chance to work with so many woods. One of my favorites, based on the beauty of the wood grain itself, is cocobolo.”

Another local wood he frequently works with is “what I call my Katrina oak. Hurricane Katrina destroyed a lot of trees, and I was able to get a lot of lumber from trees and salvaged woods.” As he makes his boxes, “you learn from each one,” Greg said. “I’ll see something that works together nicely and remember that the next time.” After completing a box, he said, “I’ll set it on my desk and stare at it, and see things I like about it and things I don’t like. It is a continual evolution of design.”

Jerry Maxey: A Woodturner, and a Basket Weaver