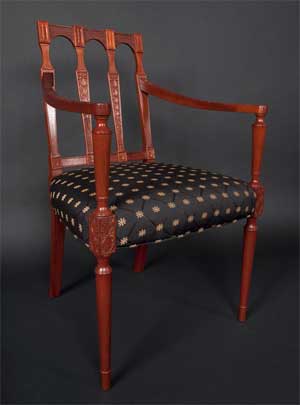 Greg Brown originally fell into woodworking after leaving college with a high level of debt, and without the physical therapy specialty he’d originally planned on. That particular field “wasn’t clicking,” he said, and when, at age 21, his mother’s veteran contractor boyfriend, Lou Aubin, said they could use Greg on the crew, he joined on and became friends with a veteran carpenter.

“He invited me over to his house for a beer, and out back he had a 1,500 square foot barn he’d turned into a shop. He told me, ‘Here’s the key, kid. Whenever you want to make something, here’s the shop.’”

Ten years later, Greg is in his fifth year of being in business for himself. Although his website describes him as a “cabinet maker and carver,” Greg said, “I’ve never really considered myself a furniture maker; I’ve always considered myself a woodworker because if it’s wood, I’ll make it if you’ll hire me.”

In the time between hanging out at his friend’s backyard barn shop and his current life, which includes being featured in shows like this month’s New Hampshire Furnitures Masters’exhibition, Greg furthered his education in woodworking. He took classes for free on topics like creating mortise-and-tenon joinery, or carving a ball and claw, while working as an assistant at the Connecticut Valley School of Woodworking. Plus, he worked for shops in the area: “A lot of experiences I had consisted of hauling lumber up two flights of stairs: 500 board feet of walnut. After two days, after they got the wood up, they’d fire me – but I was still picking up a lot of things.”

Then, Greg went on to North Bennet Street School. Although he needed to take out a loan in order to attend, “I knew what I was getting into,” he said. “It expanded my whole world. I learned the knowledge of putting things together, of working in a traditional manner.”

During his second summer at North Bennet Street, Greg worked as a shop monitor for the school, which gave him shop time for his own projects, like a Sam Maloof-style rocking chair and a piecrust table – which, when he sold it to a customer who also hired Greg to do architectural carvings at his home, gave Greg enough money to join his current woodworking collective in New Hampshire.

“It’s a 12,000 square foot building with individual bays. Everyone buys their own equipment and tools.” Greg rented his equipment from Bill Doub, the woodworker who invited him to join the collective, until he was able to afford his own. “With each project that comes, I gain more confidence,” he said.

Bill also influenced the style of Greg’s work; for a while, “I had been gravitating toward Federal design, but a lot of people do it,” Greg said. “Bill

introduced me to Art Nouveau. I wanted to translate that period of time into the present and give it a New England feel. I decided to sculpt fluid, seamless furniture that would set me apart from a lot of makers.”

For instance, the piece he made for the 2012 New Hampshire Furniture Masters Auction, “Lindsay Maple,” expanded on the organic form, Greg said. The sugar maples outside his shop served as inspiration for the table.

His “Devils Embrace” table also “speaks to how I’m moved by my surroundings,” Greg said. At the time of building it, he had never built a slab table before. “I thought, ‘If I buy the slab, I don’t have to build the top.’”

In the process of moving his girlfriend, Clare (a nurse), from Johns Hopkins to New Hampshire, they stopped at Berkshire Products in Massachusetts and bought a slab of walnut. Seeing some slabs on the wall, being sold as art, at the lumber source led Greg to think that his table could be a tilt-top, combining functionality and art. Plus, “I figured the impact of the grain was so powerful, why not integrate that into the base?”

Its three legs come from his preference to work in threes “because, if you work in a plane of three points, your piece will never rock,” and the carving mimics a devils ivy plant Greg had moved to his shop after his girlfriend’s two cats began using it as a plaything. “I literally bumped into it when trying to decide what to carve on the table,” he said.

Much of Greg’s work incorporates carving; as he progresses in his work, he said, ”I see myself focusing on being a studio furniture maker and incorporating my carving into it.” Hard, dense woods like rock maple, which allow him to really “pop” the wood, are what he prefers for carving, although right now, his wood choices are largely what the client wants for the project.

One project which did utilize maple (bird’s eye, in this case) was the Not-So-Shaker Dining Table, a project Greg made on commission for a woman who wanted “a massive dropleaf that would expand into a massive dining table.” Measuring 8’ x 2’ – 8’ x 5’ when expanded – the table is hinged on a collapsible rail system along its width. “It allowed me to experiment with machining, with something I couldn’t learn from a book,” Greg said.

Greg continues to seek out learning opportunities – he enrolled in the continuing education arm of the New Hampshire Institute of Art in order to continue to improve his drawing, for example — but overall, at age 31, woodworking isn’t an escape anymore. “It’s now my profession. This is what I know how to do,” he said.

Although Jim Shott’s been in the woodworking business for the past 25 years, he’s moved through a few different specialties as the…