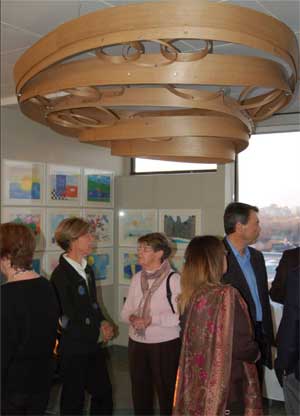 Karen McBride’s abiding love of antiques – stemming from a childhood with antique-collecting parents – has led her to an adulthood where she’s creating her woodworking within the walls of an antique log home.

Like many woodworkers, she started off her career on a different path, or paths, as the case may be. “I studied engineering, then got into computer science and did that.  I also spent a couple of years as an automotive mechanic.”

The problem with the auto mechanic work, she said, was that “Once I’d done everything once, it was not very creative.”

So, although she still tinkers with her 1970s Volkswagen, Karen was drawn toward woodworking. “I like to build complicated pieces, and it’s the best combination of working with your hands and creative problem solving, all together.”

Her interest in creative problem solving meant that, before taking any classes in woodworking, Karen likes to try building a project for herself first. She had made a stool, plus two continuous arm Windsor chairs before heading to New Hampshire for a chair-making class with Michael Dunbar at The Windsor Institute.

“The ideas of seating, and of all the different angles,” appealed to me, Karen said. And as for Windsor chairs, “For anybody who wants to make a chair, I think it’s the first chair you should make. It looks complicated, but it’s really quite simple.”

The steam bending aspect of making a Windsor chair also appealed to her. In terms of style, Karen likes curves. “People joke and say I can’t make anything with a straight line,” she said.

For the piece she’s currently working on, a small wall-hung cabinet, “there’s not a straight line on it,” she said. In fact, overall, that cabinet “is probably the most challenging piece I’ve ever done.”

It stemmed from a client who gave her a piece of maple burl veneer and asked her to build a cabinet inspired by the shape of the veneer. “The piece is the shape of a fan,” Karen said. “So the doors, instead of hinging open like regular doors, pivot at the bottom and open like a fan. At the pivot point, there are two small drawers that are completely round. It was a challenge to make the doors work, and making the drawers pivot around was difficult to do.”

Overall, in terms of wood choices, Karen said, “Veneer is my favorite because of the variety of woods I’m able to get my hands on in veneer format.” Plus, “when working with curves, veneer is your friend because you’re able to press it over the curves.” A bed she made from Karelian birch veneer is another of her favorite projects.

When she does find herself working with solid wood, it’s mostly the domestics, Karen said: maple, cherry, walnut, ash and white oak. Those first two continuous arm Windsor chairs were solid walnut, made from a tree a friend had taken down in her backyard.

Other friends have also assisted her woodworking: Karen started out in the business with an internship with Michael Fortune, and still considers him a resource she can call with questions. “He’s kind of in my corner,” she said. “I have the same kind of relationship with Garrett Hack.” Along with both those woodworkers, Karen now teaches courses at Rosewood Studio, with her focus being on the fundamentals of woodworking.

She’s also received assistance, at least in getting her studio in place, from her father.  “In the area I live in in Canada, there are a lot of old log homes and barns,” she said. “We took an old house down, my dad and I, and moved it 120 miles from where it was and put it back up again.”

The move and rebuilding of the 200-year-old house, which now functions as Karen’s studio, took about five years to complete and was challenging, in part, Karen said, because she had experience in building furniture – but not buildings.

The most challenging aspect, however, was the chinking: a process of putting a mortar-like filling between the logs. Karen and her dad put on two coats of chinking, both inside and outside. “It wasn’t difficult, but it takes forever to do,” she said. “It would be like plastering a house by hand.”

The results, however, were worth it. The studio, situated on a slab, has floors with radiant heat and triple-pane, double-glazed windows. “It’s warmer than the house, and the windows are nicer than the windows on the house,” Karen said.

Of the place where her woodworking happens, Karen said, “It’s a brand-new building with old world charm, but none of the old world headaches.”