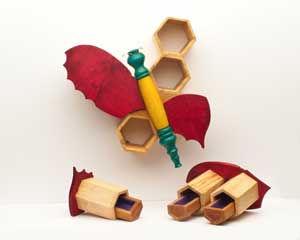 Although Jim Shott’s been in the woodworking business for the past 25 years, he’s moved through a few different specialties as the world, and the markets, have changed. His current focus? Cabinets inspired by forms in nature.

Back when he graduated high school, Jim said, he had no direction, and went to a community college for a couple of years, thinking he would be a writer. A work accident that left his arm severely injured caused him to sit out of school for a few months, which left him deciding that he couldn’t afford to, and didn’t want to, go back to the classroom.

“I needed a job, and I’ve always been creative. After visiting a lot of woodworking shops, I finally got someone to hire me,” Jim said. After spending some time doing woodworking as an employee, “I decided this was for me.” He learned different aspects, from cabinet building to construction, as an employee. “I always wished I could go to North Bennet Street School or intern with James Krenov, but it wasn’t an option,” he said. “I went to the school of hard knocks.”

Eventually, now married and with a child, Jim spent days at a job in construction and evenings “building cabinets in my basement, with about a 7-foot ceiling,” in order to build up a clientele.

In 1989, he struck out on his own as an independent woodworker. “Tradititional Colonial furniture was the bulk of my business,” he said. He was also doing projects like kitchens and libraries, and then, “Word got out that I made a nice entertainment center.”

The entertainment center that Jim built measured 18 feet long and 8 feet tall, with pocket doors to hide a television set. “They were monsters,” he said. But, as his reputation for the piece spread, “that kept me busy for five or six years.”

Jim’s project focus shifted over the next few years. “From about 1994 to 2005, I built about 130 tall case clocks,” he said. He described the clocks as museum quality,with handpainted dials and reproduction movements.

“The high point of that was when the people at Monticello, Thomas Jefferson’s house, called me to ask if I could reproduce a clock that used to stand in the kitchen,” he said.

After a few years of making the clocks, however, “Then 2008 and 2009 came and killed that market. The phone just stopped ringing” in the wake of the economic recession, Jim said. While living through uncertainty about whether the economy would rebound, Jim made a couple of decks and some built-ins for clients, but was starting to look for other jobs and thinking about shutting down his business.

“I was fairly sure people’s tastes had changed, and nobody wants ‘brown furniture’ anymore. Young people are not interested, and older people were putting their money in the bank,” Jim said.

Then, a couple of months before participating in a show, Jim went for a hike and happened to pick up an acorn. He looked at it and thought, “I could build an acorn corner cabinet.”

At the show, Jim put the acorn-shaped corner cabinet in the back of his booth, since he didn’t know what kind of response he would get. Several people looked at it, and about three months later, a representative fromGrovewood Gallery in Asheville, North Carolina – who had not spoken to Jim at the show because she didn’t want to interrupt his conversations with other visitors to the booth – called and placed a huge order.

Following on the success of the acorn, Jim started designing other cabinets inspired by natural forms. First came a honeycomb “bee box,” then a butterfly and dragonfly. “Then everybody said, ‘You need to make a flower,’” Jim said. “That took a while: the first one, the joinery blew apart, but I did get it on the second try.”

Different pieces seem to experience surges in popularity, Jim said. “It seems like at one show, I’ll sell a lot of butterflies, and at the next, I won’t sell a single butterfly, but I’ll sell a lot of honeycomb. Then, when people have been in the booth a while, they’ll say, ‘You’ve got to make ‘this,’” offering other suggestions.

With the shift in focus in his woodworking projects, Jim’s changed what he uses in his shop, too. While the table saw accounts for about 80 percent of his work, he said, he also has an edge sander that he “bought about 30 years ago for a certain job that I needed it for. It always got in my way, and I almost gave it away a couple of times. Now I’m using it a lot.”

The dragonfly piece, for instance, incorporates approximately 220 pieces of wood, Jim said. “Some of the glue blocks of the dragonfly might be 1” x 3” – but it’s critical for dimension.”

Plus, Jim said, “All my bar clamps have got half an inch of dust on ‘em because I hardly use them anymore.” Instead, he uses a masking tape and glue method of bringing the small assemblies together. “If you look at the flower, all the little pieces are hexagons,” Jim said. “They’re cut at a 30 degree angle. I take the pieces and lay them side by side and use masking tape to pull it together, put a little blue between each joint.”

The hexagon shape, used in many of his pieces, “allows for a drawer to sit there and move from side to side,” Jim said. His wood choices have also shifted. “For years, for the clocks, I used primarily cherry, walnut, maple, mahogany. I don’t use them anymore,” Jim said. Instead, “I’ve discovered quartersawn sycamore. It’s a very unstable wood, but if it’s quartersawn, it’s very stable. You can also rout the end grain, and it won’t burn.”

He’s also using ghost and ambrosia maple. “That’s been a lot of fun, to play with some new woods,” Jim said.

He’s also enjoying adding color to his pieces. Jim uses aniline dyes, in order to let the grain show through. “I’m having a lot of fun with that, because after 20 or 30 years of working with brown furniture, it’s a lot of fun working with all these bright colors.”

Still, “The woodworking isn’t the hardest part of the business; the hardest part is selling what you make,” Jim said. While working on marketing and other business aspects, Jim joined the Pennsylvania Guild of Craftsmen, which he says has been very helpful. “They really promote their artists,” he said – including using featuring one of Jim’s pieces on billboards and other prominent advertising for their shows.

Jim also gained “master” status from that Guild last year. The process for obtaining that honor involved bringing works to the Guild headquarters in Lancaster, Pennsylvania, setting it up and describing it to three people, then letting those three have a private meeting with a dozen others, “and they vote on whether you’re worthy,” Jim said. “It was an honor to get that status on the first try.”