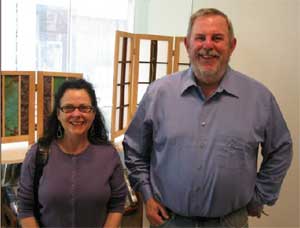 A few years ago, Peter Pihos Jr. and Terry Lee were dabbling in woodworking, and had a business in the sign making industry. Peter’s dad, Football Hall of Fame member Pete Pihos, a receiver with the Philadelphia Eagles from 1947 to 1955, had been diagnosed with Alzheimer’s and was no longer able to participate in the golf leagues that gave him some spending money.

All of these things came together when Peter and Terry, attending sign conventions, saw people using lasers to create signs for such things as ADA [Americans with Disabilities Act] notifications. They were novice woodworkers at the time – “I started out in 1999, making really ugly lawn furniture,” said Peter – and came up with the idea of making wooden keepsake cubes, designed and engraved with a laser.

At first, Peter’s dad was signing the cubes, but eventually, the business, Milestone Cube Company, grew to the point where people were requesting cubes to commemorate a variety of occasions, ranging from bar or bat mitzvahs to a bowling game with a score of 300, for which they built a bowling alley in one of the cubes, to a series depicting the Maryland state capitol building through the years for a county lobbying group.

“All of our cubes are one-off, and they’re private,” Peter said. Some people have been buried with their cubes, and some are in time capsules.

“We were early adapters, “ with the laser, Terry said. “Since then, we’ve been pushing the envelope: how can it evolve our woodworking?” They’ve parlayed this experimentation into another company, Lasers and Woodworking, and are now beginning to offer classes, tailored both to woodworkers who might want to learn to use a laser and to laser owners who could offer their services to woodworkers and other community members.

When they use the laser work in furniture, Peter said, it’s mostly for inlay, although they’ve also developed pieces featuring designs like a Celtic knot, to appeal both to those of Irish heritage and to collectors.

Terry also continues to experiment, in what she describes as a trial and error process, including attempts to incorporate other materials such as paper, cloth, or canvas, into wood products. “I have to understand the different settings, whether it will ultimately raster or vector whatever I’m making,” she said.

Terry does the designs on the cubes – limiting herself to three a week – while “We’re both equally skilled at making the cubes,” Peter said. “I like to turn, and she likes to run the router, so she does more of the boxes.”

Some of those boxes are for their third company, 5 Year Wood, focused on wooden gifts for people celebrating their fifth anniversary, for which the traditional gift item is wood. “I make boxes, different style cutting boards ….” Terry said. “If you make a lot of them, within a month’s time, you have a big supply.”

“We’re not really furniture makers per se, but we have a collection of customers who buy everything we make,” Peter said. Most of the furniture they do make is in the Arts and Crafts style, with some pieces in the tradition of Gustav Stickley and his designer Harvey Ellis. “It’s the style we enjoy the most,” Terry said. “We love the lines, we love the simplicity.”

They’re also able to find a lot of white oak, a traditional wood for Arts and Crafts style items, in their area of Maryland. “Both Terry and I like to work in walnut, cherry, maple and white oak,” Peter said.

When it comes to laser work, however, “Our favorite is maple,” Terry said. “It’s an excellent wood for engraving. Alder is good as well. With some of the settings I’ve developed, specifically with maple, I can make the image or the text just pop and look more alive.”

Many of their cubes incorporate photographs, Peter said, which requires an awareness of the grain of the wood. “ Maple and alder are good woods to engrave on, because the grain changes the least when it’s heated with the laser,” he said.

Peter will be teaching classes at Allegheny College in the fall, on designing Japanese wood blocks, and is currently teaching classes on laser use both at his own shop and negotiating with manufacturers to educate their customers.

“We found a need to educate woodworkers on how they could go about including laser techniques in their work, and also people who had lasers, on the opportunity to do service to other people in their area,” he said. Using the Japanese wood blocks as an example, he noted that they are an old art form, traditionally carved by hand. “Now we can take someone’s computer file, whether it’s one color or five colors, and people with disabilities can do it,” he said. The local college, he noted, is excited to reach out to older people who may not have strength in their hands.

Peter and Terry also use their lasers to make tools, including all of their own rulers. “You can do more intricate work with lasers,” Peter said. “I suspect over the next number of years, a lot more lasers will do stuff for woodworkers.”