You can learn to build anything of wood at the Homestead Heritage woodworking school, but unlike most schools, they’ll teach you to do it with hand tools. “We take someone with zero woodworking experience,” explained instructor Paul Sellers, “and in six days they make a dovetailed box, a wall shelf with dadoes, and a walnut end table with haunched mortise and tenon joints. The stock is pre-prepared to dimension, but from there, everything is done by hand. That foundation course is the basis for what they will need to move on to Windsor chairs, rockers, tables, dressers and all sorts of other furniture.”

Sellers is one of four instructors at the school. Each class of 16 students has two instructors and an aide. There are currently over 30 classes per year offered, which means over 500 students per year are served by the school. Paul is presently working on a more comprehensive 13-week artisan program that would be more like an apprenticeship.

The school, though, is only a small part of a rather unusual community of about 1,000 people situated in Elm Mott, Texas. Homestead Heritage is a community geared to a particular lifestyle, what Sellers called “a challenge to simplify our lives. We have 500 acres, raise food and animals and live a simple life working with our hands in the context of our beliefs.” Among other things, they home-school their children, which they feel makes them more involved in their education. “Visitors can go to the gristmill and buy stone-ground grains, or to the blacksmith shop and have hinges made or a plowshare repaired,” Sellers explained, “but in addition to buying things, you can learn to make them as well. We teach bread baking, spinning and weaving, smithing and of course, woodworking, along with a host of other skills.”

Oddly enough, this all started as a New York City church on the Lower East Side of Manhattan around 1973. It wasn’t a particular denomination; merely a few people who wanted to share their lives with others. Originally members of a mission church, the people involved started to see that there was more to life than going to church once or twice a week and felt it should be an entire lifestyle. The church grew, and 16 years ago, the group moved to Texas, bought land and set up the village and community of Homestead Heritage.

Along the way, they established a furniture-making business, and in 1995, a woodworking school was added, in large part because of the arrival of Paul Sellers. He had originally apprenticed back in his native England in 1965, became a woodworker and migrated to America in 1986. He went to Texas seeking a rural, rustic area with wide-open spaces.

Paul arrived at the community in 1990, and a few years later, started teaching woodworking to other community members. Visitors to the craft village, which draws some 50,000 people a year, learned about it and started asking if they, too, could take woodworking classes. “We took down their names and addresses and invited them to attend a one-day class,” Paul recounted. “I did a symposium of five, one-hour workshops: the history and development of hand tools, the nature of wood, necessary joints and specific hand tools, then actually made joints. 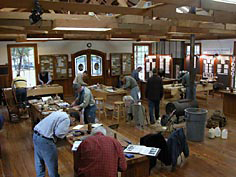 “The students then asked, ‘Where do we go from here?’ I wrote a curriculum for hand-tool woodworking, and the school was born. The basis of the curriculum was that with three joints and 10 hand tools, you could make almost anything from wood. Eleven years ago we started with one class, and now there is a year-round woodworking school operating. People fly in from all over the U.S. and other countries as well.”

They teach everything from the first foundations of sharpening hand tools and joint making, to advanced furniture making, turning, chair making, and about everything else in the pantheon of woodworking. You can even go there with a particular item in mind to make, say a certain dresser, and learn to make it.

“The one difference,” Sellers pointed out, “is that we teach only hand-tool methods, because we want to address the issue of skill building and not machining. We have a full machine setup that you would find in any cabinet shop: planers, jointers, table saws, band saws, and so on, but no one trained here would ever consider using a router. I can lay out and make a set of dovetails by hand much faster than setting up or using a router and jig. Once you learn to use the old hand tools, you can set them up and use them in a fraction of the time and adapt them to almost any use.”

Paul’s insistence on hand-tool skills is for good reason. “One year I did a series of lectures for a group of 65 woodworkers,” he told me. “I asked ‘How many of you use hand tools in your present day work?’ No hands went up. I then asked how many have ever used hand tools, and only one hand went up. I try to lay a foundation of woodworking using hand tools because I think it is fundamental in coming into a relationship with wood.”

“Too often we think of woodworking as an industrial process. My goal is to de-industrialize woodworking. The difference for me is that I split, shave, and form the wood into whatever it is going to be — a cello, a joint, or a piece of furniture. That gives me a sense of feeling the direction of the grain that is intrinsic to me as a craftsman.

“With a machine, I don’t have that kind of relationship. For me, it means my mind is fully engaged in making minute, incremental adjustments the whole time I am working the wood. With a machine, you pre-set it to take care of all that, and it does not require that sort of connect. It is more satisfying for me to work this way, but just as important, I can control things like the grain and structure of the wood used in the piece, which can yield both appearance and strength benefits in the final piece.”

For Paul, along with his fellow community members, this lifestyle is the perfect solution, and he counts his woodworking abilities as critical to having gotten him there. “People get on a conveyor belt,” he explained, “and don’t even know they are on it. Because I have the hand-tool skills, I was able to get off it.”

“In the 41 years since I started my apprenticeship,” Paul summed up, “I have enjoyed woodworking every day of my life. I can’t imagine doing anything else. In its truest sense, “amateur” simply means one who does something out of love. I’m just an amateur that gets paid.”