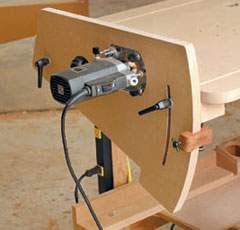 Martin Doyle was a welder/fitter in Pittsburgh, Pennsylvania, when he came up with the idea for his modified square. Martin used it to try to get around the edge of a flange, but then he started showing it around, and people told him woodworkers could use it.

The “square” — shaped like a Greek gamma (G) with a capital “L” dangling from its arm, allows you to measure, mark and square at the same time. “It eliminates picking up a bunch of tools, ” Martin said. It can be used as a regular square, and it eliminates “picking up the square and squaring up the flange, then picking up a tape measure.”

In other functions, the Modified Square also forms four 90° angles, and can be used as a straightedge. It gives the tread and rise in one move if you want to lay out stringers for stairs. With the handle, it can also reach into tight spaces.

Martin himself used his square in building a three-room “cathouse” for the family pets. He and his two kids, Joe and Marina, used the square to transfer lines inside and outside so they put the nails in the right place, and also in making square cuts on the boards.

This all happened a couple of years ago. “I started thinking about it and thought, ‘There’s 290 million Americans, and a modest figure is that 10 million of those Americans have to pick up a square every day to their job.” That, plus several million home do-it-yourselfers convinced Martin that there was a business opportunity here. “If we didn’t have a square a try square, a combo square at work, I wouldn’t be able to do my job.”

With the help of his wife, Sandy, he secured a U.S. patent and a small business loan — although Martin’s still employed in the welding job he’s held for the past 20-some years.

Finding the right materials to make the square, Martin said, was another hurdle. “I got several steel samples cut out of different types of steel and found out they were too soft,” he said. He finally found the right steel this year.

“I have been learning a lot along the way of what it takes to get a business started. My wife said sometimes it’s like a roller coaster ride: it has its ups and downs.”

Martin’s now selling his square via his web site, www.modifiedsquare.com. “It’s amazing to come from where I was,” Martin said. “I think I’ve come pretty far.”