When you think about it, who better to design woodworking apps for a smart phone or tablet computer than a woodworker?

That was exactly the motivation that inspired Norman Lucia – a lifelong cabinet builder and architectural woodworker – to begin developing three applications for Apple iPhones, iPods and iPads three years ago. You may have seen our write-up of his products in our August 2011 print issue’s “What’s In Store” (page 20).

But far be it from the skills of most shop rats – and I’m certainly including myself here! – to be able to sit down at the computer and dive into the intricacies of computer programming, even with that perfect woodworking application in mind. Most of us would probably rather download it than design it. But that wasn’t an option for Norman, who intended to use the apps he planned to write. Nothing like them existed. So, in a pioneering spirit, he set out to invent a few virtual “wheels” of his own.

“I’ve always believed that carpenters, cabinet makers and woodworkers have to figure stuff out constantly in the shop. In order to build something well, you also have to know plenty about the tools you need to use to get the project done. Many of us have to learn all of that on our own. That mentality and determination just goes with the territory for us out on the job site …When it came to writing my three apps, I made up my mind to do it, then just figured it all out,” Lucia says.

On top of the sheer learning curve, Norman also had to become a licensed Apple software designer and continue to maintain that card-carrying status. His “pull-yourself-up-by-the-bootstraps” fortitude has culminated in Lucia’s three software products. The first one, launched in 2008, is called RadiusCalc. Norman designed it for the iPhone initially, so that cabinet builders or carpenters in the field could enter two measurements of a curved surface and instantly receive the exact radius, circumference, arc length or diameter for it – all using an inexpensive phone app. He needed it, and it just seemed logical that other woodworkers would find it useful, too. Since that time, many customers have, Norman says. It’s his best seller. Almost immediately on the heels of developing RadiusCalc, Lucia launched his second app, called AngleCalc. It took several months of development time, but the basic programming architecture was already there to support the new app. You can use it with either an iPhone or an iPod Touch. “AngleCalc can determine any odd angle you run across when installing moldings on walls or ceilings, or really whenever you need to determine an angle on a woodworking project. You capture the angle references you need with a straightedge, measure the midpoint between them and enter it in AngleCalc to equate the answer. After that one launched, I rewrote it so that it will now also calculate complex miter saw angles too.”

Norman’s latest app – ArgyleCalc – is intended for the iPad and includes graphics. It packages both RadiusCalc and AngleCalc in the same program.

Lucia traced his background as a woodworker for me, which he certainly credits as the base of knowledge he needed to create practical software applications for woodworking. Both his grandfather and father were full-time homebuilders and trim carpenters, and his dad eventually opened a custom cabinetry business in Florida. Norman grew up in those shops, “hammering things together at a very early age.” 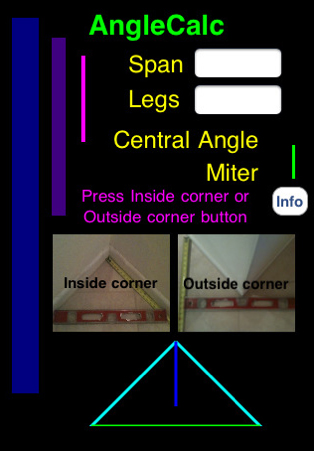 In the 1970s and ’80s, Lucia’s father began designing wooden sound and acoustic fixtures for the post-production television industry. It was highly specialized and exacting construction, akin to outfitting the inside of a private jet with cabinetry, Norman explained. He joined up with his dad to do the same work in Indianapolis and then Atlanta, gaining a reputation for their high-quality results. That led to opening his woodworking business, Argyle Cabinetry, in 1994. Some distinctive and noteworthy projects and contracts have come out of those shop doors in the years since. Lucia once designed and built cabinetry for the National Oceanic and Atmospheric Agency.

“I also built a personal recording studio in the mid ’90s for Yanni, using some exquisite mahogany and veneers. Not long ago, I watched a recent interview he did, filmed in his home studio. I was able to see the beautiful woodworking I did again … It was really gratifying for me.”

Some of his production studio woodworking once appeared on the cover of “dB Magazine,” a trade publication for that industry at the time. During the heyday of custom woodworking at Argyle, Lucia invested in one of the first ShopBot CNC machines, and that precipitated learning how to not only use CAD but also program it. Norman chuckles when he says that he was using CAD when it was still written in DOS. The technical aspects of software design seemed to come pretty easily to him, and he admits that computers have always been a hobby of sorts. “I found that the visualization opportunities for designing woodworking projects on the computer saved me so much time! I just loved it once I got into CAD, and I’ve stuck with it ever since.”

About eight years ago, business began to slow down for Argyle Cabinetry, and Norman found himself having to bid against and compete with the larger cabinet retailers. Eventually, it was a battle he was having a harder and harder time winning. A friend suggested he take his programming skills in another direction: designing precast concrete and stone molds for what is now a booming Florida architectural industry. “I’m primarily a mold maker these days, and it’s very challenging work. Designing molds requires me to use all of the skills I learned as a cabinet builder and as a software designer. I create the CAD programs for designing molds to pour fluted columns, outlookers, cornices, bandings and various other architectural forms. Precast trim details are widely used on distinctive and expensive homes here in Florida. What was done in wood, now will last much longer in stone.”

But, those roots in day-to-day woodworking are firmly planted for Lucia. So is his drive to continue creating clever apps to make woodworking problems easier to solve. He says ArgyleCalc is the first app in what he hopes will eventually be a full “tool belt” of software solutions for woodworkers and builders. It’s been a dream he’s had since the ’80s, and one he plans to fulfill in the future. While the ambition is definitely there, Lucia admits that he wishes he had much more time to devote to software development. For now, noodling out new apps happens in the wee hours around his full-time work as a mold maker. “At this point, considering all that I’ve invested in order to create my three apps, there’s no way I’m even close to recuperating my costs. But I believe in the camaraderie between woodworkers … I hope my software will help others. I’m really proud of my apps; they’re like children to me.”