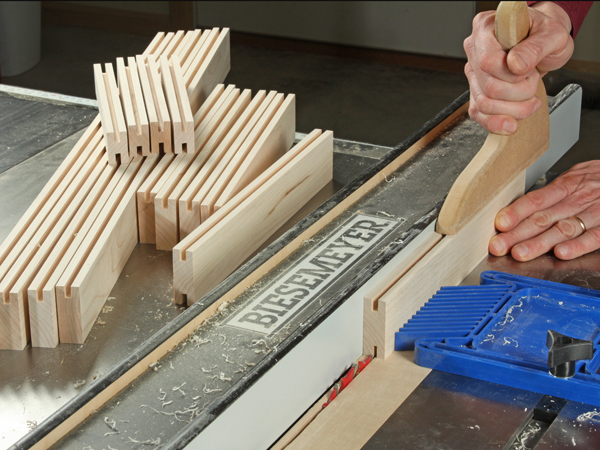 I have a 1975 model Craftsman 9-in. table saw that has been working great for 40 years. I am going to build a new table for it and would like to get an aftermarket rip fence for it. Which one should I get? – Michael Uelmen

Tim Inman: I used to have one of those little saws. Mine had another brand name on it, but I’ll bet it was similar. I actually like that saw. It became the proud property of somebody else when we moved to Wisconsin. Otherwise, I had intended to convert it into a veneer/marquetry banding saw. So, we’re on common ground.

What fence? Well, for what use? For my marquetry and banding needs, I would have made a custom fence that had virtually zero clearance between the fence and the table. For banding and veneer work, the height of the fence would have been minimal, so I probably would have made a fence no higher than one or two inches. My fence would have had a clamping system that allowed very tiny adjustments and stayed perfectly parallel with the blade. The clamping systems on many of today’s rip fences would be perfect. Being able to quickly adjust the fence and then set it with one clamp at the operator’s end is idea.

For bigger work, I would still stay with the same requirements for the fence clamping and locking system. But, I would beef up the fence and make it higher. I really like being able to add a sacrificial surface fence board to my “real’’ fence. This can be a foot or more high, which is handy when cutting rabbits on wide boards. But it is also nice to have a wide fence that is only 3 or 4 inches high for when I want to make a sliding saddle accessory. This comes in handy when making up and using a tenon jig, for example.

So, think about what you really want to do with this little saw. It has limitations, but it also has huge possibilities. Then buy, build or adapt a fence to suit your needs.

Chris Marshall: Even though your Craftsman saw has worked well for four decades, it’s not surprising that to one degree or another, the rip fence has come up short. Old table saws had notoriously bad rip fences that wouldn’t automatically stay parallel to the blade. In fact, it’s only been the past 20 years or so since table saw fences across the industry have gotten better, because end users demanded it. And these days, it’s tough to find a really “bad” rip fence. Most of them are T-square style with a strong clamping system that keeps the rip fence aligned with the blade and still easy to slide and lock down securely.

That said, we at Woodworker’s Journal haven’t reviewed the market of aftermarket rip fences in a long time because there hasn’t been much cause to do that anymore. So, I don’t have a specific table saw fence model to suggest for you. But in addition to Tim’s suggestions, I have a few for you, too. Buy a fence with facings that are flat along their full length—not all of them are. The fence’s steel or aluminum spine should be stout enough not to flex on the outfeed side of the saw when pushing hard against it, and of course the front clamp should lock it down securely to the front fence rail. Make sure the index scale is easy for you to read and that the hairline cursor is down very close to the front fence ruler so the readings will be clear. I have found on some fences that the magnifier-type viewing windows sometimes can lead to inaccurate fence settings because the hairline cursor is raised up too far from the scale, causing parallax issues.

Since you can’t really compare aftermarket rip fences side by side at a store where you could put your hands on them, read user reviews as you shop online. You’ll get a sense pretty quick of how well a particular fence works for other woodworkers and tradespeople. And, you’re probably also checking out woodworking forums for input. If any of our eZine readers have an aftermarket rip fence recommendation for you, I’m sure they’ll leave a comment about it below.