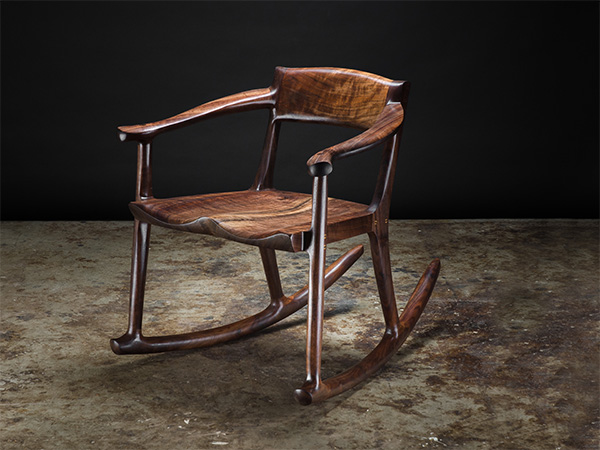 There’s a problem with the chairs that Robert Erickson makes: once you sit down in one, you don’t ever really want to get up again. I mean it. It takes a supreme act of will to get out these chairs. They are that comfortable.

And it’s difficult to reconcile because they are, after all, wood chairs. These aren’t overstuffed Barcaloungers® with heated cushions, Magic Fingers® and a pocket for your remote. Erickson’s chairs are beautifully designed, artistic pieces of furniture. You look at them and think “they’ve got no business being comfortable too.”

But they are both supremely comfortable and elegantly beautiful, and we are all just going to be forced to get over it.

Robert makes his chairs ? which constitute about 90 percent of his work ? in Nevada City, California. He says he started building chairs, about 30 years ago, because he lives in a rural area and needed projects he could easily transport to shows. Since he wanted to build furniture and get it to market, chairs made sense.

From Wagon Wheels to Lumbar Support

The first thing you notice about the chairs’ design is the back. It’s what Robert calls a contoured floating back and it is the key to making these wooden chairs so comfortable. He says he got the idea when he went to visit a fellow craftsman ? a wagon wheel maker in Susanville, California ? and saw some of his chairs. They were straight simple wooden chairs with backs “that he just failed to glue properly, so they had a little bit of movement,” says Robert. That movement gave him the idea for the design of his chair backs. The floating, flexible slats, he says, create both lumbar support and an adjustable surface that makes it comfortable to a wide range of people.

There are other key features Robert takes into account when making chairs. The height of the seat, especially in his rocking chairs, determines the angle of repose. What he calls the “mouth” of the chair–the angle of the seat as it relates to the back of the chair–is also very important to the comfort of a chair. Finally, the height of the arm will create either more or less pressure on the shoulders of the sitter. “Even a half an inch change is a great deal in the height of the arm. By playing around with that, you can really fine tune chairs so they are comfortable.

A Chair By Any Name

In addition to his general-purpose chairs, Robert also customizes chairs for clients. Like a tailor, he needs to know specific measurements from clients who want a chair built especially for them. He needs to know how tall the person is, how much they weigh, how long their arms are, the height of the lower part of their leg and the distance from knee to hip. With these measurements he can tailor a chair for a client.

If you wander his web site, you’ll probably notice that most of his chairs have names like the Seeger Recliner, the Elrod Chair and the St. Paul Settee. Robert names particular designs after the clients who commissioned them or, if they prefer, lets them name the piece themselves. Often those customized pieces become part of his repertoire and becomeone of his standard numbers. “It’s surprising how well a standard chair reaches so many people,” says Robert.

Robert has been influenced a great deal by Hans Wegner and the whole Scandinavian design movement. He actually lived and worked in Norway for a six months. Sam Maloof also affected his career. “I’m forever indebted to Maloof for creating a particular look that’s really, really hard to mass produce. So he’s created a niche for those of us making handmade chairs that didn’t really exist before,” says Robert.

As beautiful as his chairs are, they are primarily designed for practical use. A friend once told Robert that “the work I do is more reflective of community and of people enjoying each other, a kind of social interaction where friends are having a glass of wine and having conversations. Other chair designers see the chair as a more ceremonial, formal kind of object in a room and not so much for sitting. My stuff is made to be used and sat in,” he explains.