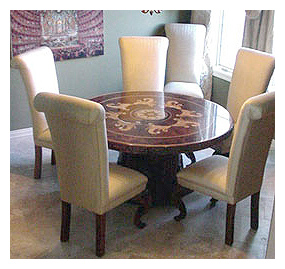 Most people who choose woodworking as a hobby do so at least in part because of the contrast between it and their day jobs. Dennis Zongker, one of the partners of Zongker’s Custom Woodworking, takes a slightly different approach. His day job is woodworking, and his hobby is also woodworking. The difference is the caliber and type of work he pursues on his own, and for this local hero who once foiled an armed bank robbery, that makes it all worthwhile. “My brother and I own a custom furniture business with about 11 employees,” Dennis explained when I asked about his day job. “I started working in a cabinet shop as a summer job at age 14, but I wasn’t serious about it. I took the job because that was what was available. I really wanted to be a pro football player, but knee surgeries during high school football killed that dream. I started playing guitar instead. I played professionally for about five years, but also worked at a cabinet shop where my brother was employed. At that cabinet shop, no one knew how to make real furniture, so I taught myself by reading about it in books and magazines.

After five years, my brother and I got together and opened our own shop. That was in 1989. “The shop grew quickly, and before another five years had passed we had 11 employees. Fortunately, they tend to stick around, so we are able to maintain high quality in our products. At first we did the same sort of work we had done as employees, architectural woodwork, but slowly the furniture work started to come in. We still do very high-end kitchens, but most of our work is now furniture making. A lot of our sales come from our web page, and some come from our architectural woodwork clients. The business is busy enough that we can probably be twice the size we are. “My brother handles the designing side, and I engineer and build the pieces. As a consequence, all day long I am on AutoCAD doing drawings and running production. That means I have to do my own sort of woodworking when I can steal the time. My own passions are marquetry and carving. True, I get to do all the carving and marquetry for the company, but there is not all that much demand for either, so I also do it as a hobby.

“A turning point for me was a chess table and two chairs that I made for myself, because I love to play chess and I love woodworking. This was a more complex piece than what we were used to making in the shop. I made the chess table first and incorporated chess pieces in it as design elements. For example, there is an upside-down king in the base of the table, and knights make up the feet. The chairs follow the same motif, with a queen’s crown on the back of the chair. After making the first set, which I still have, I sold two more copies. Shortly after that, I made an inlaid and carved table. Both tables won awards from an industry magazine.

Currently, I am working on a triangular end table that incorporates the things I want to build. Too often, I end up building what others want. This one is for me, and has elements that speak to me. It sports a carved, winged lion, a scroll reminiscent of a violin head and a rose motif marquetry pattern on the top. “I love the company and my brother, but at this point, I am ready to head off in a new direction. I want to keep building individual pieces, and want to incorporate more of this sort of building into our business. These are the sorts of pieces that are very satisfying for me to make.”

In addition to building, Dennis also dabbles in restoration. “I like doing restoration because it is old world,” he told me, “and things were made better then. About five years ago, Union Pacific hired me to restore the furniture in the railroad box car that Lincoln traveled in. The car, complete with its furniture, is now in a museum in Omaha.”

Apparently, merely building and restoring is not enough. Dennis is currently working on a book that is a step-by-step account, including joinery, carving, marquetry and finishing, showcasing the carved and inlaid table he is currently building. “I’m self publishing,” he explained, “and hope to have it done in about six months. It will be heavy on pictures and illustrations rather than text, and will be aimed at the experienced woodworker. I don’t see myself as a great teacher, but I feel I am a good example.” That is quite an understatement, for in his town he is held up as a very fine example indeed. “I was named citizen of the year once here in Omaha after helping stop a bank robbery,” Dennis recounted. “I happened to walk into a bank while a robbery was going on. A cop was wrestling with a gun-wielding robber. I took five women into another room for safety, and returned to find the cop had been shot by an accomplice of the first robber. One gun was on the floor, and one of the robbers was heading for the gun. The other had already run through a glass door to escape. I got to the gun first, threw it aside, took the cuffs from the cop and cuffed the robber. When more police arrived, at first they thought I was one of the robbers. Eventually, it all got sorted out. The cop survived but lost his spleen, the other robber was caught, and both are currently serving life sentences. The story did wonders for our business, since all three local news channels were here afterwards.”

Though others tout his heroism, his own satisfaction comes from his work. “With all the manufacturing going overseas, I am proud to be one of those in the U.S .making furniture,” Dennis maintains. “I would like to see the trend reverse and have more manufacturing come here.

“What makes me tick is becoming better at what I do. No matter what I do, I always want to be doing better, and that gives me the drive and energy to keep trying.”