“If you would like to learn woodcarving, you need to find a teacher;” advises Dimitrios Klitsas, an expatriate Greek carver who lives in Massachusetts, “one that knows what he or she is doing, and who has a desire to teach. When you get sick, you look for the best doctor: do the same when seeking a teacher. I’ve never written a book on the subject, because I don’t feel you can learn woodcarving from a book. You must see it happening over and over from someone who knows how to do it.”

When it comes to carving, Dimitrios certainly knows how to do it. His carvings are sumptuous: deep, rich, flawless and downright lifelike. “For the most part, we copy nature when we carve,” Dimitrios explains. “The closer you get to copying nature, the more pleasure it gives.” By that reckoning, his carvings must give almost infinite pleasure, and that has not gone unnoticed. In 1994, Dimitrios was awarded the Arthur Ross Award for ornamental woodwork in the classical tradition. Take a look at some of his pieces, and you’ll have to agree it was a well-earned honor for a career that has spanned his lifetime.

Klitsas was born in 1948 in northern Greece, and his education in carving started at a fairly early age. “When I was 13 years old,” Dimitrios recounted, “I went to a four-year technical school in my hometown in Ioannina, Greece. At 17, I moved to Athens to work for a private woodcarver for about a year and a half. At that point, my teacher from Ioannina, Angelo Moskos, came to Athens and opened his own studio. He was a well-known carver in his own right as well as a painter and teacher of architectural styles. I worked for him for five years, then joined up with another student from the school to open our own shop. That lasted about four and a half years until I got married and came to the United States.”

Why? “I was young and was looking to explore the world,” he replied. “Although my wife is also Greek, she had been in the U.S. already and had a green card, so that let us both come in. I got my own green card and, five years later, I became an American citizen. We arrived in Worcester, Massachusetts in 1976, where she had a job waiting for her. I managed to find work in a shoe factory making shoes for the military. At the time, I spoke no English, so I went to night school to learn it. I felt constantly in the dark. Fortunately, there was a big Greek community in Worcester, and that helped. “After about a year or so, someone recommended me to a woodworking factory that needed a little carving here and there, and I got hired to do both woodworking and carving. That lasted about four years. I moved to the suburb of Springfield to work with a Greek woodworker who did church work and had a lot of carving. A couple of years later, in 1985, I started my own shop. I built and carved a few pieces in the beginning, mostly for churches, but soon got to the point where I could do only carving, and that is what I do today.

“As soon as I started my studio in 1985, I started teaching three hour night classes in carving. My students learned carving from me while I was learning English from them, so it helped us both. Over the years, I have taught hundreds of students, including a few who opened their own shops nearby; one is right in town here. He sometimes helps me when I have extra work.

“In the beginning, teaching was a way to make a bit of extra money, but there is the fun factor as well. The most important thing for me when doing a carving for someone is the pleasure they get from the piece, which is far more important than the money. I feel the same way about teaching; what matters is seeing my students’ happiness at their success while learning and growing, and that happiness is infectious. Their happiness makes me happy as well. 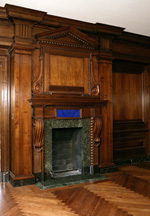 “In addition to teaching the nuts and bolts of carving, I also teach students how to see the difference between good lines and poor ones. Having good lines in any design is critical so that the carving flows properly. Sometimes the only way to teach that is to show right and wrong side by side, so I will carve the piece to show them how it should look.

“I remember one student that was with me for four years. He used to go to European museums frequently, but with his developing awareness, things started to change. ‘You spoiled me,’ he told me. He had learned enough about how to see carvings, not just how to do them, that he started to see flaws in pieces that he had never noticed before, and was disappointed.”

As important as carving is to Klitsas, he is under no delusions about what it does and does not do, and sees precisely where its real value lies. “Carving is not part of the structure of any furniture. You can take the carving away from a chair and it will still support you, but carving does add beauty and art to whatever it goes on, no matter what form it follows.

“A well done carving is a piece of art no matter what the style. It is not the object you are carving that matters, but how well it is carved. You take a piece a wood and cut it and modify it, and it can talk to you. You bring it to life so that it is no longer just a dumb piece of wood.”

Done right, the result is not just art, but pleasure, and for Dimitrios, that matters as much as the carving itself. “Sometimes people see their carving and just start laughing from happiness. I asked one customer why he was laughing, and he said he could not help it. He was just so happy.”