After years of frustration with factory-made turkey calls, Doug Wright decided to just quit “cold turkey” with store-bought calls and attempt to craft his own. Although very successful with the factory-produced sounds, Wright just couldn’t find the sweet spot he was looking for.  Avid gamers admit the large fowl process of “calling” is just as big a part of hunting as the actual kill. Combining his inherited love of woodworking with his love of the outdoors proved to be a lucrative combination for the young Rockmart, Georgia native. 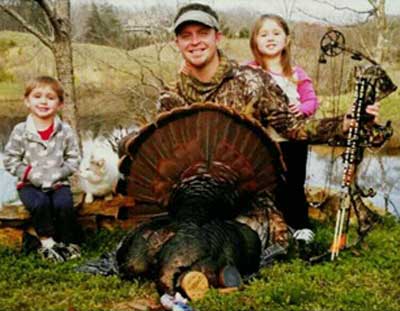 “I began making them just a few years ago for personal use. After many botched efforts and drawers of mistrials, I finally crafted one that I was pleased with,”  Doug said. Only after his first call produced results in the woods would he show it off. After sharing his wares to fellow hunters and friends, he was surprised at the interest in them.  “I only intended to make me some calls. Then my friends wanted one. Then strangers wanted them. The next thing I knew I had dozens of orders.” Although just a young Tom himself, Wright has been credited for producing hundreds of personal calls that, in his own words, “sound realistic, are deadly effective, and yet celebrate the natural beauty of the materials.” 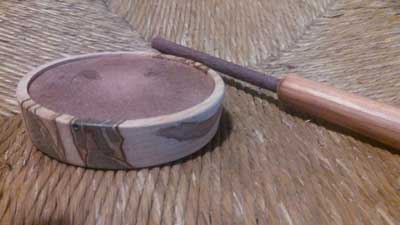 Slate calls, also called pot calls, are often chosen for their ease of use and authentic sound. Made from a basic round disc of slate, ceramic, glass, or copper, these calls are paired with a “striker.” The striker can be made from wood or carbon and paired with any given pot. When gently “striking” the striker across the face of the call, various turkey sounds like clucking, purring, and gobbling can be produced. What sounds like a simple gadget can be just as much a work of art. Wright wanted to make a product that would be both functional in the hunt as well as aesthetic to the eye. Although naturally talented, Doug gives most of the credit to mentor and friend, Lonnie Mabry of Waleska, Georgia. “He probably got tired of me bothering him,” Doug said. “He was so precise and knowledgeable about everything from the many sounds of turkey to the different sounds that various grains of wood made. Combining different wood strikers with different plated materials produces hundreds of variations  of sounds to choose from, thus an endless combination of pot calls to make.  Denser woods like hickory and cherry are slow growing and thus make a tighter wood with a higher pitched sound. On the other hand, fast growing woods like bass and cedar are looser wood, making a lower sound. “I just soaked in his expertise and knowledge. I cherish every piece that I purchased or received from him,”  Doug said.

Doug seems to have a personal connection with each of the pot calls and strikers he makes recounting from which wood he claimed for the piece. For instance, “One of my favorite calls was made from a pecan tree in my Granny Wright’s yard. Because she has passed, it just brings a sentimental value to each hunt I make.” Each striker and call is one of a kind and turned by hand. The process begins with selecting a wood full of character. Wright chooses to pick his own trees and have the wood milled down. “The ambrosia curly maple is a hot item right now,” Doug stated. “It is just so full of unusual line patterns that is just plain fun to look at.” After the right wood is selected, Doug uses a jig pattern he made to standardize the size of the pot and then hollows out the belly using his drill press. Next, he rounds the square base into the common circular shape with his band saw. Now, it is time for the initial round of sanding as the call begins to take the recognizable shape. Then, holes on the bottom are drilled to allow the sound to breathe. This is vital because the holes aid in increasing volume and pitch. A very important step takes place at this stage. The soundboard is now adhered into the hollow of the call. The soundboard is crucial. Doug primarily uses a wooden sounding board but admits that other materials can be used. The height of the soundboard will affect the controlling rollover sound. A rollover sound is the distinct transition between the pitches of a turkey noise that hunters hope to replicate. Hunters usually have a preference when it comes to the sound they want to produce. Wild bird sounds range anywhere from the tight raspy to the low throaty calls. When the soundboard is applied, it is necessary to let it cure for at least 24 hours. After it has cured, Doug will do a fine touch final sanding.

The last stage of making the pot call is applying the surface. The surface of the pot is critical to the outcome of the hunt as well as to the looks of the call. Surfaces can be made from many materials including glass, slate, or Doug’s favorite, copper. Recently, Doug has filled several custom orders including using glass surfaces with inserts such as photographs, Copenhagen lids, or other small logo items just underneath the surface on top of the sounding board. These personalized touches make great conversation pieces as well as wonderful gifts for the serious hunter. After the pot is complete, Doug begins on the striker. Generally strikers begin with a rectangular block of wood that Doug cuts and sands on the lathe to the desired look and feel for the grip. After the handle of the striker is turned, a hole is drilled for the peg of the striker. The peg is the true striker and thus is installed as the final step in the entire process. That’s the process for a standard pot call but, never complacent, Doug ventured out and created unique and unusual specialty pots also known as cluck and purr pots to add to his repertoire. These calls add finesse to the general calls made most often and are for the most part used for soft clucks and purrs such as in high stake competition calls. These are designed for the serious hunter and produce a select sound that makes the hunter smile and the turkey cry. Doug Wright comes from a long line of carpenters but works himself as a full-time teacher. Prior to taking on turkey calls, he piddled with simple projects for family and friends like small furniture, shelves, and recently a landscaped Lincoln Log table for his children. Creating his own personal turkey call, was the first paying project he attempted. He says he can now turn a custom order within one hour, minus the curing factor. In 2014, he launched Wright Custom Calls and has been taking orders ever since — including from his spouse. “I will continue to turn pots, calls, and strikers, but my wife told me I had to turn some wood that was productive in our house,” he said, jokingly adding that he may just use some “leftover wood” to make her a table. “Well, after turkey season!”