Some companies mark two decades of business with great fanfare, but family-owned GREX would rather see 2016 as the right time to launch an innovative cordless 18-gauge brad nailer. Celebrating anniversary milestones is lower on the priority list, and that suits the folks at GREX just fine.

“Frankly, we didn’t even remember it’s our 20th year in business,” admits Raymond Wong, GREX’s vice president of sales and marketing. He says he’ll consider the new brad nailer to be a fitting way to mark the anniversary instead.

Looking forward rather than back, with a commitment to building high quality air tools, has been the guiding principle for GREX and its founder, Frank Wong, since the beginning. Back around 1995, when he started the business in the family’s garage, the challenge to become a new tool-brand name in the fastening industry, among other well-established giants, was daunting. Frank, a former gift shop owner and retailer, was starting from scratch in every sense of the word. “My father did not know a single thing about the industry,” Raymond says. “He had never even used a pneumatic nailer or stapler before. But that didn’t stop him. He’s always been a quick learner and a hard worker.”

And, the time was ripe in the fastening industry for change. Some other pneumatic toolmakers were beginning to outsource their manufacturing from the U.S. to Taiwan. Nailers and staplers produced in Taiwan were considered to be of great quality, and the opportunity was there for more Taiwanese tool brands to enter the field.

Through acquaintances of friends and family, Frank formed a partnership with a group in Taiwan that wanted to start up a new nailer and stapler factory. The plan was for him to sell product and form a dealer network in the U.S., while his partners manufactured the tools overseas. So Frank sold his gift shops and moved his family from the East Coast to California. There, he started making sales calls to tool stores, driving around Los Angeles as the company’s only sales force. Slowly but surely he convinced other tool retailers to begin carrying his products. 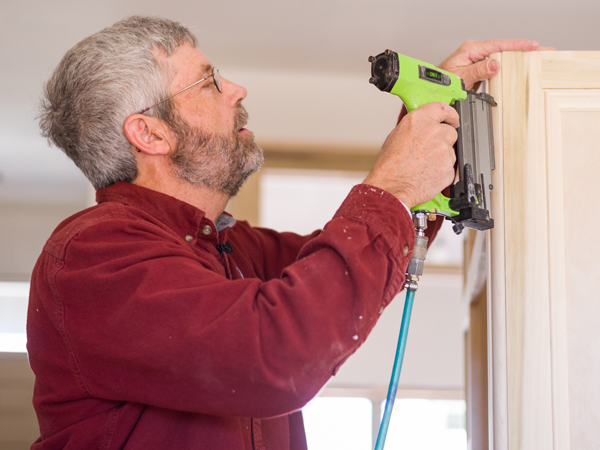 “It was tough, because we were a ‘no-name’ brand. Regardless of how good the product was, most people wouldn’t even give it a second look,” Raymond says.

But fortune was smiling. One of Frank’s dealers introduced him to Jerry Carter, who had just retired from SENCO as its national sales manager. Jerry agreed to come work for Frank, “and somehow, they just clicked,” Raymond says. “The combination of my father’s savvy business sense and Jerry’s knowledge, experience and relationships in the industry, allowed the company to steadily grow.”

An attractive product inventory helped, too. GREX soon offered a full catalog of industrial-grade pneumatic nailing and stapling tools and, Raymond adds, the early designs were focused on simplicity and durability. GREX came to be known as the value brand capable of providing quality tools at a reasonable price. Then a string of successful 23-gauge pin nailers galvanized GREX’s reputation with professional contractors and woodworkers alike. First there was the P630 in 2000, followed by the P635 in 2004. Both pinners were easy to use, with self-adjusting magazines and offering longer pin lengths than their competition. The company’s P650L, which came to market in 2007, was the first 23-gauge pin nailer that could shoot up to 2-in. pin nails. “We believe this revolutionized the industry — many applications that used to use 18-gauge, 2-in. brads now could be replaced with 23-gauge, 2-in. nails instead,” Raymond says.

But brad nailers continue to be mainstay tools for customers, and GREX offers them, too. Raymond reports GREX’s 1850GB “Green Buddy” is its best-selling 18-gauge pneumatic brad nailer. The company also expanded its breadth of inventory about 10 years ago with compact airbrush tools. In addition to some 50 different fastening tools, GREX now makes 30 variations of airbrushes, spray guns and compressors. It’s a side of the business that is growing steadily.

“Our airbrush sales are now comparable to our tool sales. We apply the same philosophy to the airbrush as our tool side. We focus on offering premium quality, differentiated and innovative products. And for that we have been recognized as a premium brand in the airbrush industry.” All told, GREX’s inventory includes about 3,000 products, factoring in nails, fasteners and replacement parts, and it currently has some 400 dealers across North America. The company caters to professionals, Raymond adds, so GREX products are not available through big box stores.

Commenting on how the company distinguishes itself in the marketplace, Raymond believes GREX’s commitment to quality is key to its reputation among the pros. Whereas some other companies have lowered prices in recent years to capture the DIY market, the tradeoff has been durability — and pro users have noticed the quality slip. GREX has steered clear of the “bargain-basement” approach.

“We’ve been able to differentiate ourselves by actually continuing to do things the same way as we started,” Raymond says. “We still design and build tools like they used to be made 20-plus years ago. I like to say we are ‘Old School.’” By that, Raymond says GREX builds all-metal tools rather than using composites, with metal magazines and metal internal parts. Many of GREX’s tool models today are the same ones that were part of the company’s original lineup, so they are proven in the industry. And, GREX is committed to providing replacement parts, which he says customers know they can depend upon.

“We know how important it is to make replacement parts available and affordable, and we make a point to support the tools we sell, because we are not in the business to sell throwaway tools.” Aside from a commitment to customer support, Raymond credits GREX’s “flat” corporate structure and small family-run style as part of its success, too. He says those at GREX who work closely with customers are the same people who make the decision to invest in new products, design them, oversee their manufacture and, eventually, sell them. It makes the company nimble enough to respond quickly to opportunities, and to innovate products that customers genuinely want.

“We don’t release new products all the time, but when we do, we want to be sure there are differentiated features over the competition that are of value to the user. Why make something new that’s no different from what’s already offered in the market?” he says. To that end, Raymond is excited about GREX’s all-new GC-1850 Cordless 18-gauge Brad Nailer. Woodworker’s Journal saw a preliminary version of it last summer at the AWFS trade show in Las Vegas (to see a video, click here), but Raymond reports that some production details still needed to be finalized. It will launch officially by the end of this month on the company’s website. To recap the product’s highlights, it’s the only cordless 18-gauge finish nailer operating on replaceable fuel cells that is as small as a traditional pneumatic 18-gauge nailer. It will be lighter than its competition, with all-metal construction, and it’s capable of shooting 2-in. brad nails into hardwood. It will offer the lowest cost of fuel per shot, and it requires just two AAA alkaline batteries that will last at least 50,000 shots. The street price will be about $450. Raymond hopes the new nailer will be a fitting way to mark 20 years of business. And, unquestionably, GREX has come a long way in that time — from a retailer’s garage startup to one of today’s leading air tool manufacturers. But for founder Frank, and five other members of the Wong family who are among GREX’s employees, humble beginnings are far from forgotten.

“For my father, GREX was started as simply a means to provide for his family … There were no intentions to grow a huge corporation or to sell the most tools or to be well-known. It was about building a sustainable business. To achieve that, it was about building a respectable business, offering great products that we believe in and are passionate about. And providing a superior level of service to our dealers and customers. That same philosophy still guides our company today.”