Almost 10 years ago, the Woodworker’s Journal eZine profiled Minnesota netsuke carver Janel Jacobson; recently, we caught up with her again.

In the years since we last spoke to her, Janel has received an Enduring Vision Award from the Archibald Bush Foundation, acquired a lathe, presented one of her carvings to a member of the Japanese royal family, and experienced some life changes.

Janel’s signature type of work, netsuke (pronounced net-skay) carvings, had their origins in Japan, where they originally functioned as utilitarian toggles for hanging a pouch from a belt. They now function as small, decorative carvings. One of Janel’s friends says netsuke “need to have a twist.” “It may be something carved into the piece or it may be having [an animal carving] do something human,” Janel said. For instance, she might carve a frog with a cocked head. “Frogs do cock their heads, but if you turn it up so it’s looking at a person, something changes the look of the creature. It gives it a gesture that humans can relate to somehow,” she said.

Most netsuke made in Japan are under two inches in size, Janel said, although they do run the gamut from small to large. “That’s a scale I hadn’t been working in, and I’m trying to remember that,” she said. This means starting out with smaller pieces of wood — which also makes the carvings harder to accomplish, and means she needs to simplify from some of the complexity she’s been carving into her pieces in the last four years. “I’m not allowing it to be plain; it still needs to have some kind of character,” Janel said. “For me, it’s a substantial challenge. I don’t always get it, but I enjoy trying.”

One of her works, “Running Rabbit” is currently in Japan, in preparations to go on exhibit. “My Japanese netsuke carving friends always have suggestions for how I might approach it differently,” Janel said, and Running Rabbit seems to be a piece that would appeal to the Japanese taste: it’s a single subject, with a direct presentation. Janel herself traveled to Japan in 2008, with the daughter of one of her netsuke carving friends acting as a translator. “I’ve always wanted to go to Japan,” Janel said, ever since college, where she studied pottery. However, “In the ’70s, women going to work in Japanese potteries wasn’t something that was happening yet.” Then, “When I got to the carving wood part of my life, I still wanted to go, since what I was doing was related in a cultural degree. The netsuke format is Japanese in origin.”

One of the highlights of the trip was delivering, in person, a piece that Princess Takamodo had ordered from her. The widow of Prince Takamodo (cousin to the current emperor), Princess Takamodo is a netsuke collector who Janel described as “approachable, easy to speak with, and knowledgeable about many subjects.” The netsuke delivery, she said, “wasn’t as complicated as I thought it would be.” After she returned from her Japan trip, however, Janel said, “I didn’t have a chance to integrate it. The hard part is that, after I came back, my mother’s failing health needs were increasing.” Her father had passed away in 2006, and she found herself needing to make frequent hour-long drives to care for her mother, or to spend six weeks at a time staying with her. “Japan was just a memory.”

Janel’s mother passed away in 2010, and it is just recently, she says, that “I feel like now I can ask myself the questions: What kind of influence might the trip have on my work? How do I integrate it with what I’m also interested in?”

One of those other interests is woodturning. In the past few years, Janel acquired a lathe and took lessons from St. Paul, Minnesota turner Jim Sannerud. “I wanted to learn to use the lathe — I didn’t know what a loaded desire that was,” she said. After starting with a JET Mini Lathe, Janel is now using a Vicmarc, and says that one of her goals is to turn forms and “bring what I know about carving to the turned pieces.”

She has had an opportunity to do some turnings with woods supplied by William Jewell from Historic Woods of America. They were small pieces, because “the wood I had was small to begin with,” she said, and included tulip poplar from the Thomas Jefferson era, boxwood from the James Monroe estate, and sycamore that may have been planted by George Washington. She’s also needed to experiment with different finishing materials for her pieces. Several years ago, she was using artists oils on her pieces that had finish. “I really liked it, but one client I did a piece for 10 years ago, loaned it to a museum for exhibition and the oil is sort of going darker, turning a brown color. I realized I didn’t have all the answers to using oil paint as far as stability.”

The piece Summer Singer, a carved cicada from 2006, was finished with artists oils, but around 2007, Janel stopped using them. Since then, she has focused on using wood with good colors, but has found it more subdued. “Now I’m ready to start investigating using color again,” Janel said. “The pieces I make are for looking at and to be held for a while, so I want some sort of barrier between the hand and the wood.” Some options she has tried and might use again include polyurethane, applied with a cloth like a French polish, “because I don’t want brush marks, and I don’t want sanding lines,” or Renaissance Wax.

The woods to which Janel applies these finishes might include holly, ebony, boxwood, desert ironwood and more. She has even carved a fungus that someone gave her, after letting it solidify for a year and then hollowing it out. For detailed carvings, boxwood and mountain mahogany function well, says Janel. She also points out that not all of her work is netsuke — partly because of what she wants to do, and partly because of the American audience. “Anything I do is unusual in the field of wood art, and it’s not always easy to sell,” she said. “When I get ready for a show, I do some netsuke, and some small sculptural pieces.”

For her future work, she’s curious about increasing the scale she works in. “I might be acquiring larger pieces of wood in the first place and figuring out how to work with it, instead of all the little tiny pieces,” she said. “It’s not simple, because I’m not making multiple products, I’m making individual items.”

After turning 60 late last year, “I’ve had an interesting passage. Both my parents are gone, and our generation is now the older generation. There aren’t a lot of decades ahead of me. I feel released, in a way. I can move forward, and do anything I want to. 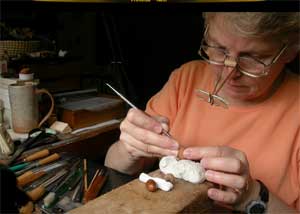 “I’m looking forward to new things, but when I’m sitting in front of the carving bench, I know exactly what I’m doing and what I need to be doing; whether or not it fits into the big picture isn’t important at the moment.”