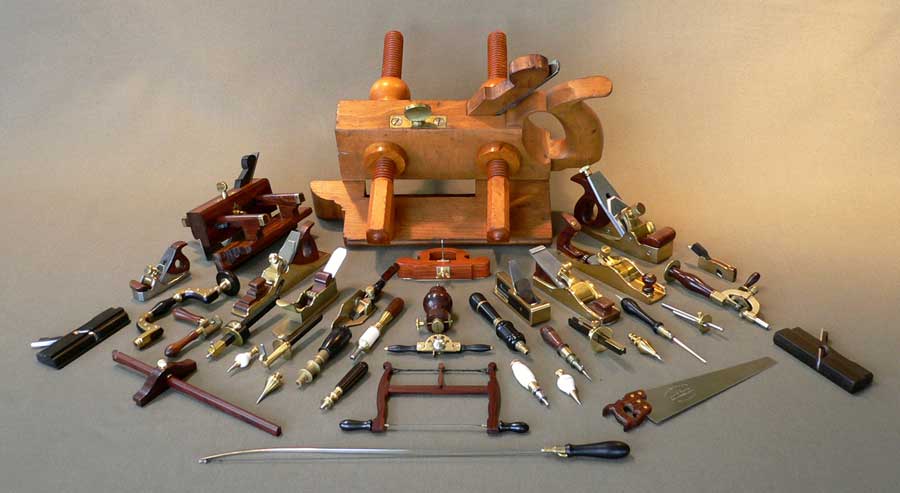 “I always liked tools,” John Maki admitted to me. “As much as working with them, I always liked collecting them. I suppose that is because growing up, my father’s tool collection was pitiful. Once I started doing remodeling work, it seemed there was always a tool I needed, and before long I built up a pretty good shop.” That’s all well and good, but as you can see from the photos, the tools John now has in his collection, all of which he made, are quite Lilliputian. How does one get from collecting functional full-size modern tools to building functional miniature Victorian era ones? “I suppose it started in 1961,” John recounted, “building kitchen cabinets when I first got married. When we bought a home in 1968, I finished the entire downstairs including built-in cabinets and an imitation beam ceiling, then did it again in another house. With each succeeding move, I ended up building and remodeling whatever house we were in. I was less a hobby woodworker than a practical DIYer.

“That was not my day job. I started out as an electrical engineer, moved into engineering management, and for 15 years was a director of research and development for 3M in St. Paul, Minnesota. I retired in 1995 and decided I wanted to do something else, preferably something more interesting.

“Another hobby of mine was photography, and I was particularly taken with miniature cameras. Over the years I collected about 250 miniature cameras from all over the world. About the time I retired, I decided I had been there, done that, and soon started looking for something else, preferably miniature. At the time, I couldn’t collect miniature tools because I did not know that many of them even existed, but the idea fascinated me. “My wife and I moved to Washington state and settled in Port Ludlow in 1998, but prior to leaving Minnesota, I had set up a small shop, bought a lathe and a mill, two tools I had never had, then set out looking for something to do with them. At first I decided to make a steam engine, but after a month of working on it, I concluded that this would be a two-year project. I just don’t have the patience for that, so instead, I started making miniature hand planes. “The first one, a copy of a Norris plane done in steel, turned out OK, and I was hooked. Next came a larger brass version of the same Norris plane, with more of the original details copied. At that point, a rather significant thing happened. I saw an article about a tool miniaturist named Paul Hamler, and I called him and explained what I was doing. He talked to me for at least an hour. After that, I sent him photos of the two planes I had built and asked for his observations. The first thing he advised was that I pick one particular scale and stick with it, preferably the most common one. I did just that, and my subsequent miniatures are almost all in the same scale. Over the ensuing years, Paul has become both a friend and a mentor, often helping with any questions I had in our shared field. He’s a real gentleman.

“After a recent tool show, I decided to make 15 miniature Holtzapffel bow drills, potentially to sell, and 15 miniature copies of a Windsor hand beader. The beader is based on a patent from 1885 for a tool designed to cut beads onto the edge of wood. A circular cutting blade with several different profiles on it can be rotated to choose which bead shape you want. The cutter can be positioned relative to a small fence to create the step-back for the bead. In order to copy it accurately, I bought an original at auction. I often buy tools to copy, then sell the originals once I’ve made the miniature copy.

“One of my favorite pieces is an engraver’s ball, meant to hold a watch for engraving. The ball allows the jeweler to hold and rotate the object to make it easier to work on. I found it on eBay, bought it and copied it in miniature. There are 16 different parts in this seemingly simple tool, and some of the ultra-fine threads were a real challenge. The main knob has both left- and right-hand threads to make the jaws come toward one another when it is turned. “The tiny bow saw was the first piece I made after buying a CNC (computer numerically controlled) mill. With it I could turn out a dozen frames in an hour and a half. However, if I could only show someone one tool, it would be my small geared drill, often called an eggbeater drill in this country. It has style, movement and an interesting texture that looks like it just came out of a casting. I do that by blasting it with glass beads through a miniature sandblasting kit. “I think miniatures are wonderful, and not just in the area of tools. To develop an eye and think about what it takes to authentically scale something down offers a lot of challenge, yet demands very little in the way of supplies. In all my tool making, I have probably used less than one board foot of lumber.

“Making miniatures provides me with a collection of tools that spans the Victorian timeframe with a variety that demonstrates the art of the tool maker at that time. As we moved on, tools became really basic and functional, but in that one period, from 1830 to 1900, there was more style and art in tool making. That’s the period I copy.” John points out one more perk to his hobby that is especially enviable for those of us struggling to find space for all the gear we’ve collected.

“I can store my whole representative collection,” he reports, “in one modestly sized case that sits in the dining room.”