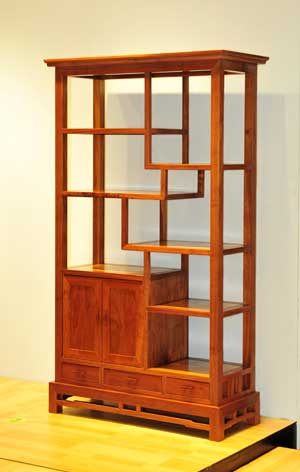 One sunny Saturday this past May, I had the pleasure of previewing the 33rd annual Design in Wood show at the Del Mar Fairgrounds, just north of San Diego, California. One of the most impressive — and possibly the largest — show of high quality woodworking in the country, the exhibit is part of the annual San Diego County Fair. Cosponsored by the 22nd District Agricultural Association and the San Diego Fine Woodworkers Association (SDFWA), Design in Wood was founded in 1982 by the SDFWA’s first president, Lynn Rybarczyk. This juried exhibition had 332 entrants this year, competing for 61 awards and more than $20,000 in prizes. That’s where I came in: I was there to choose a winner for the “Excellence in Joinery” award, presented by Woodworker’s Journal magazine. There was certainly no shortage of excellent woodwork on hand, spread over 24 different classes of entry, including furniture (both traditional and contemporary), accessories, veneering, marquetry, turning, carving, clocks, models, musical instruments, and scroll sawn work.

Built primarily from walnut, Van Winkle designed his large, freestanding cabinet after a similar one he saw on a trip to China. The unit has seven open display shelves, featuring panels covered in beautiful olive ash burl veneer. The lower cabinet, which sits atop a low base, has three drawers and two pairs of doors, all of which can be opened from either the front or back of the cabinet. A clever arrangement of magnets keeps the latch-less doors closed and automatically centers the drawers in their closed positions. Donald told me that one of the trickiest aspects of building the cabinet was assembling its many parts. It took 11 different carefully planned subassemblies, glued up over as many days, to put everything together correctly (even the drawer pulls are each constructed from several separate parts). Overall, it took about 650 hours to build the piece. One of my treats during my visit to the Design in Wood exhibition was spending time with SDFWA show coordinator Bob Stevenson.  Bob, an excellent woodworker in his own right, has been running the show since 1995. It’s clearly a mammoth undertaking, organizing a gallery style show that each year juries and displays an average of 270-310 pieces submitted from woodworkers all over the U.S. (as well as the occasional international entry). As Bob and I walked around the spacious 7,500 square foot Mission Tower building that’s home to the show, I was impressed with how well all the woodwork was displayed and lit: Many of the larger pieces were organized into harmonious groupings and set on low platforms. Smaller and delicate work was displayed so it could best be seen, either atop tables or inside Plexiglas showcases. In addition to the gallery show, Design in Wood boasts quite a few additional events, including woodturning, woodcarving, scroll sawing and model-building demonstrations that take place in booths adjacent to the central gallery space. There’s even a recreation of a 19th century cabinet shop on-site, where SDFWA volunteers use traditional hand tools to make preschool-sized oak chairs that are donated to local community organizations. They’ve made over 1,600 of these small chairs to date.

My visit to Del Mar ended on a somewhat bittersweet note. The night after the awards judging, I attended a volunteer appreciation dinner where Bob Stevenson was honored for his 20 years of exemplary show stewardship. After he had passed the show’s reins to SDFWA’s special events chairman Ed Gladney, Bob told me that at least now, he’ll be eligible to enter a piece in the show himself.

Next year’s show will take place from June 5 to July 5, 2015. The theme will be announced later this month. Keep an eye on the Design in Wood section of the SDFWA website for information about entry requirements for next year’s show.