About 10 years ago, Keith Neer’s wife told him, “You’ve been talking about doing something other than in your basement. Why don’t you do it?”

What he’d been doing in the basement, of course, was woodworking, a hobby Keith got into about 40 years ago. “I found a lathe — and the story sounds like what your parents may have told you about walking to school in the snow with no boots — but we really didn’t have any money. I made candlesticks for Christmas presents.”

During his years employed at the Kroger Company grocery chain, Keith would go to his basement shop, “even if it was just for 15 minutes to do a glue-up or to take some clamps off, to recharge my batteries.” After the conversation with his wife, Keith took her advice to heart and began preparing for the post-retirement phase of his life. He bought a commercial property about six or seven miles from his house, moved all of his tools over there a year before retiring, and, in the last years of his full-time employment, began taking the woodworking classes he continues to pursue.

“I learned about 80 percent of what I know about woodworking in the last five years,” Keith said, “even though I developed a great passion for it many years ago.” Many of Keith’s classes have been at the Marc Adams School of Woodworking, where he’s currently pursuing a fellowship. About six years ago there, “Michael Fortune and I struck up a great friendship.” When working in his corporate career, Keith said, “I knew that the right side of my brain was really something I needed to work on. I was trained as a scientist and was comfortable with the left side of my brain. That kind of linear thinking fits pretty well with part of woodworking: when you build furniture, it’s sequential. That’s what appealed to me early on.” On the other hand, Keith said, Michael Fortune “is an artist first and a woodworker second, and he’s the one who said I needed to stop engineering my furniture before I got designing it.” When thinking about how to construct a piece, using the processes he knew, in his designs, “all my joints ended up to be simplified and all my lines tended to be straight,” Keith said. One of Michael’s well-known pieces is “Chair Number One,” and Keith thought, “If I could build something like that chair, I could master anything.” Today, in his woodworking, “If I’m going to make furniture, it’s probably going to have curved elements,” Keith said. He’s now enjoying the challenge of nonlinear thinking: “the process that results, building jigs to control cuts and features, is intriguing to me.” As he builds those projects, Keith said, “I really don’t build the same thing twice.” Instead, “Most of what I build has a specific function — such as a series of drop-leaf tables he built for a local farmer. The request was for a series of tables to go into a 35′ x 40′ room, to accommodate up to 40 people at a time for holiday occasions, at a 20-foot length — but to fold down to no more than three feet wide when broken down. He also cites entertainment centers as interesting, and restoration work as intriguing. “Understanding construction of things allows me to go deeper than the average refinisher could, and with pieces that are heirlooms or emotionally connected, it’s very rewarding.” Keith says he’ll probably never be recognized for a specific piece of furniture, because “I don’t make 100. I used to say in my career that you have a certain amount of intellect, and that’s all you have to spend: you have to make a choice, whether to be broad-based but shallow or narrower but deep.”

As a woodworker, he said, “I call myself a generalist, because I have a lot of interests. I’m good at veneering and doing string inlay, but that’s not my whole thing. I also do steam-bent, laminate.” Recently, he built a veneered mahogany table, for which the the tabletop utilized a hollow-core technique and the legs were veneered over poplar, with string inlay cut in. “As I look to the future, I’m probably going to do more veneers. It’s very flexible and unique, very demanding. Maybe that’s why I like it.”

Keith also teaches woodworking classes at that new shop his wife encouraged him to build, which have ranged from group classes with up to eight students to teaching up to six people at a time on an individual basis. The individuals, he said, are generally professional or retired people who either have a specific project in mind or want to build a specific skill. He has also assisted Michael Fortune for a couple at his classes and will be teaching a class on his own in 2012 at the Marc Adams School, on The Principles of Woodworking Through the Eyes of a Table. 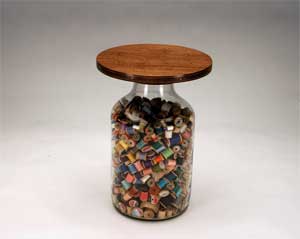 “My passion is to demystify a lot of what all of us read about in woodworking,” Keith said. “People like Marc Adams and Michael Fortune have been a great inspiration to me, and this is a way to pay that back.”

With his classes and his projects, Keith said, “I hope I’ve got another 20 to 25 years in me to do this kind of work. I tell people woodworking is a wonderful career if you don’t have to make any money out of it. At this point, my business plan is to make enough to cover my expenses and support my habit.”