For her very first venture in woodworking, Layne Halliday built an entire house, complete with exotic wood parquet floors and filled with furniture in a variety of styles. Not only that; she did it all without stepping outside her home. That’s because it was a dollhouse, and that venture launched her into the tiny but impressively accurate world of miniature furniture. That first attempt was so good that it currently resides in the Denver Museum of Miniatures.

Her current output includes faithful reproductions of period pieces, including chairs, tables, cabinets, pianos, and even a collapsible traveling organ, all at one-twelfth scale, and built with the same joinery and wood as the real item. The road to her prowess in diminutive woodworking came about largely because of misfortune, and only fairly late in the game. “Life for me started at 60,” Layne told me, “when I got divorced after a 42-year marriage and set out on my own.

“I grew up in a Southern family and did all the right things that a woman is supposed to do,” she confessed. “After getting a degree in psychology in college, I got married, had two children, and became a housewife.” While living in Idaho, she got interested in horses, learned to ride, and bought her first racehorse with a 10 dollar bill. “I went to the racetrack, bet the ten dollars, and started what would become a serious education.” Over the course of the next year, she spent time at the track, learned what to look for in horses, bet regularly and managed to win enough money to buy a horse at a claiming race. Her love of horses continued for many years; she went on to own, buy and sell horses both alone and in partnerships with trainers. She also showed horses and became a serious rider and jumper, a turn that eventually resulted in her taking up woodworking. “I had a serious horse riding accident in 1982, and was laid up for about two years,” Layne recounted. “During that time, boredom set in, and I decided to use my hands doing one-twelfth scale petit point. A friend suggested I do a dollhouse, and I constructed it in one-twelfth scale. It took a year, and was so big, that I could not get it through the doorway. I had to cut a larger outside door in the living room to get it out. The house was a copy of a San Francisco ‘Painted Lady,’ the term used to describe a fancy, gingerbread-encrusted Victorian home that is painted in at least five colors.” Gingerbread is an industry term describing wooden scrollwork ornamentation, often appearing in corners, under eaves and on porches. “It had exotic wood parquet floors, furniture in a variety of styles, and was fully wired with lights and power. It was an education in building a house.

“I was hooked, and realized I liked working with wood, especially furniture. After the dollhouse was done, I concentrated on miniature furniture.” Her favorite periods are 17th through 19th century French and English furniture, but she’s recently added some more modern Art Nouveau and Art Deco pieces as well. Along with furniture, she often does whole miniature rooms, and those, too, are copies of rooms that truly exist. “Doing miniatures means I can work with beautiful, rare woods that are hard to come by in pieces large enough for furniture,” Halliday explained. She often seeks out exotic wood whose unusually small or tight grain pattern makes it ideal for miniature work, so that even the wood grain looks scaled.

“I build my pieces the same way full-size furniture is made. That means making mortise and tenon joints, dovetails, veneering, marquetry and parquetry; whatever the piece is, I duplicate it.” Even the building process is the same. “I often will make jigs and fixtures, just as full-size builders do, reduce patterns that exist, do measured drawings from pieces in museums and collections, and take pictures and make drawings from that.” In fact, she once set the alarm system off in The Louvre while trying to take pictures of a Marie Antoinette desk in order to copy it in miniature. “When I find a piece of furniture I like, I take measurements and photos, bring them home and make a blueprint in one-twelfth scale. I then take the photo and blueprint, make a prototype, usually from wood whose pattern is not tight enough, and keep it.” Once that’s done, she makes the real piece, but keeps all the prototypes. By keeping track of her time on the prototype, she knows what to charge for the real thing, and keeps copious notes on exactly how it was done. The notes and drawing go in a folder for future reference.

Her two favorite pieces are both musical instruments. One is an upright grand piano, and the other is a collapsible organ that has a full keyboard, 14 hinges, and collapses just like the real thing. “It is a copy of an organ that was last used by the Navy in 1952.” 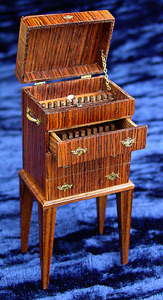 Along the way she has accumulated an interesting collection of tools, from full-size milling equipment to process lumber, down to miniature saws, drills, planers and dental tools. Hand tools include scalpels, homemade sanding blocks and jigs, miniature files, jeweler’s saws and vises. “I have seven different sizes of motorized saws,” Layne pointed out, “and a specially made miniature lathe.”

That’s all part of the necessary tooling for a woman who works wonders in miniature, and when it comes to Halliday’s masterpieces, smaller is definitely better.