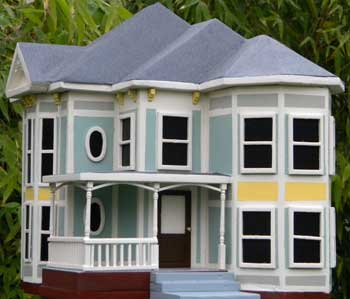 Michael Bowen used to work in housing construction – and, in a way, he still does. The houses he makes now, though, are meant to be homes for families with names like “wren” and “finch” and “bluebird.”

His Bowen Birdhouses business began recently, as a result of the recession. For a few years, Michael had been working for Extra TV building sets for things like backstage interview rooms for the Golden Globes and SAG (Screen Actors Guild) awards shows. “With the recession, they cut back on the awards shows, and just did a drape and a chair,” he said. He had built some birdhouses for friends and family over the years and, when looking for a new job, went with the suggestion from a friend who said “I love my birdhouse so much, you should build these for other people.” The unique aspect of the birdhouse Michael had built for his friend – and offers to his customers – is that it’s a custom copy of the house the humans live in. People send him photos of their abode, depicting it from multiple angles, “so I see the different roof lines and everything. I get the sizes and measurements in my head from looking at the photos,” Michael said.

Then, he builds a birdhouse to match the human house. “I started off with small houses, and now I’m getting into larger mansions,” Michael said. “The custom ones are an opportunity to think. Each one’s a unique design.” Those designs, however, use the building techniques Michael employed when building houses – and, before that, when learning woodworking from his dad, with whom he built his first birdhouse – “other than being really creative with the band saw.” Michael miniaturizes some objects for the birdhouses, like one which featured a flying eagle decoration on the front. The eagle, he said, was less than one quarter inch across, requiring fine detail work. “I’ve really gotten good at that over time.” The bulk of these custom birdhouses are built from 11/32” thick exterior grade plywood, with details like chimneys, bay windows, etc., constructed from pine. Michael uses waterproof wood glue and finish nails and fasteners and finishes the exteriors with oil-based paint. After the paint has dried, he applies a matte clear sealer to keep the birdhouses as waterproof as possible. Although Michael himself is not a birder, he has done research into accommodations for the large variety of birds across North America, who require different size boxes, depths and hole sizes, and he’s learned from birders, as well. For instance, if he puts an entrance hole high on a box, he’ll also include square dowels on the inside of that box to form “ladder steps” in case the birds nest too deep and the baby birds can’t get out. Also, he said, “You shouldn’t attach a perch to a birdhouse, because it would allow a predator to stand there and get the baby birds.” And the reason he leaves the interior of his birdhouses as plain wood is so that the birds don’t peck at and ingest any of the paint or finish. Michael does have stock birdhouse and bird items, as well as his custom houses. He offers the traditional bluebird nesting house and what he says is his most popular item, behind his custom houses, a cardinal nesting platform made from cedar. “I like using cedar a lot because it’s lightweight so it ships easily, and it has a nice, aged look to it. It’s from fencing so I know it’s built to last. It’s one of my favorites to work with.” When he first started his birdhouse business, he was using materials left over from his set building days for construction materials. While he’s gone through that stockpile, he has used leftover supplies in his Zombie Birdhouse offering. “I’m a big fan of zombie movies,” Michael said. Created with leftover ends and trim work of other pieces he’s done, “This is the house you see at the end [of the movie] after they’ve boarded up the windows.”