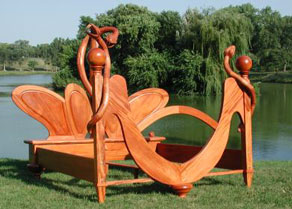 When Nathan Stanley came back to Minneapolis in the late 1980s, he wasn’t sure what he’d be doing next. He’d originally learned the family trade from his father, a carpenter, but never intended to be a woodworker. Then while spending five years in England, he’d worked as a furniture maker. Since they make a lot of their doors at the jobsite, he got a good background in joinery. When he returned, in his early thirties, he worked as a finish carpenter until he got sick of it. Fortunately, he eventually found clients who encouraged him to add an extra curve here and there to his woodworking and, as he puts it, he began to push his luck. To his surprise, they liked what he did and let him use his imagination ever more. That helped him develop his aesthetic approach to the craft. And, by the time he was 35, he decided he could turn his woodwork into something more.

“There’s an old saying,” explained Nathan, “that all the arts aspire to the condition of music. Whenever I build something, I find that I put music into it. My raised panels create a tempo and, whether they are close together or at angles, it all creates emotion. And the lathe work and carving are like melodies. Just this morning I came across a quote by Goethe that architecture is frozen music.”

Things really took off when he connected with Minneapolis restaurateur Kieran Folliard, who wanted to build an upscale Irish pub and restaurant.

“He thought we could do a lot of damage together,” Nathan laughed, “so I designed and built the back bar; the hand-carved wood ornaments, and the stained glass for what became the ‘The Local’ in downtown Minneapolis.”

Word spread … Nathan has never advertised … and today he is nationally recognized for his room-sized creations … especially for his large-scale bars in both trendy Minneapolis restaurants and the dens of million-dollar homes in that city’s western suburbs. He recently won the People’s Choice Award at the Northern Woods Exhibition Of Fine Woodworking for his “Of Man’s First Disobedience” bed frame.

His interest and appreciation for bars and pubs comes from the time he spent in the British Isles. He came to see them as cathedrals … where you can buy a drink. When you walk into one, he thinks the space should feel like favorite music and like it’s an old friend. And he often incorporates stained glass in his bars to accentuate the connection. In his work he’s usually given free rein. A piece may incorporate both cherubs and bats to represent both hope and joy and crushing despair. He explains the extremes of his work as imperative elements of the yin and yang and often expresses them in a musical vocabulary.

“You need the conflict,” he explained, “between the loud and bold music of the piece and the sweetest little voice of a delicate finial.”

Having established his reputation, Nathan enjoys a unique relationship with his clients. Those who request his services should be (and usually are) prepared to embrace his unique vision for their project. Not that he doesn’t listen to them.

“I ask if they are more Rolling Stones or more Beatles,” Nathan explained, “to get a feel for them. I find out if it’s a dark, masculine room or if it’s something light and then try to figure out what color the woodwork should be. Then I try to get a read on what kind of artist the customer likes: do they like Frank Lloyd Wright, or do they like a square box? If they like a square box, they usually don’t like my work.”

When he presents clients with his first designs, they sometimes hold the rough sketch upside down. And that’s OK with Nathan.

“But if they want a more detailed drawing,” Nathan explained, “I warn them that I won’t follow it anyway.”

Forewarned, most of his clients tell him to take the project forward. He builds everything in his studio in the garage behind his house — wedged between a coffee shop and an apartment building in a slightly down-in-the-heels South Minneapolis neighborhood. His tools are simple … a power saw, miter saw, and a lathe. Plus hand tools and lots of clamps.

“I’ve never had a joiner,” he noted. “When I built The Local bar all my tools were Mickey Mouse and I had to clamp everything. I really don’t care about the wood or the equipment. It’s what you do with it. I’d rather have a cheap piece of willow and carve it and turn it into something beautiful.”

He sands his raised panels by hand, so they won’t look perfect … that’s the charm. And another woodworker closely inspecting his work might notice that sometimes the grains on raised panels don’t quite match. He admits it’s occasionally just carelessness on his part, and sometimes he thinks he might be going too far with his designs. But his confidence seems to carry him through; he’s so certain that what he does will put music and emotion into his woodwork.

“If you believe in something, your hands will win the battle,” explained Nathan. “If I want to carve something and it’s part of the beautiful symphony of the piece, it doesn’t matter if I’ve never carved it before … my hands will follow if the mind is strong enough.”

Nathan is currently working on a raised-panel structure for a multimillion-dollar home in the affluent suburb of Orono. One of his unexpected challenges is working around all the wiring and incorporating it into the piece. But he’ll work that out, and the result will contain both emotion and music.

“I want someone walking into one of my rooms to feel like they’re in a pot of soup that’s swirling around them,” Nathan described. “I want them to feel the way I felt when I first heard Wagner.”