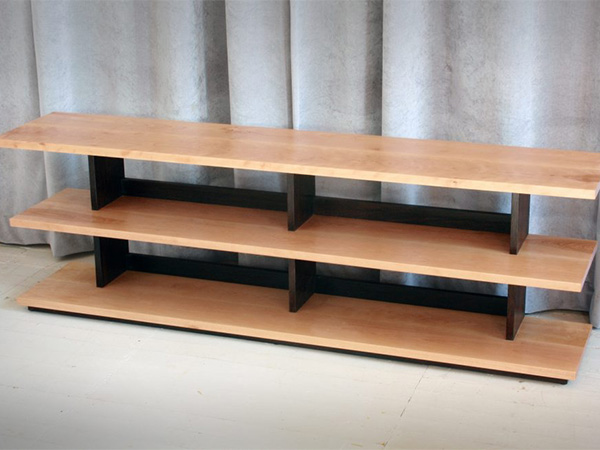 It’s very easy for most of us to get distracted away from our true passion – woodworking – but Jonah Zuckerman had the sense to go back and reconnect with what he does best. He did a stint as an architect a few years back, but it didn’t give him what he wanted out of a career. So now he has a four-person shop and runs a furniture-making company called City Joinery in Brooklyn, New York.

While architecture taught him a lot and you can see the influences in his furniture, Jonah confesses that “I didn’t enjoy sitting still.” His true love was design and building things, and architecture didn’t let him do that fast enough. In architecture, he says, “you get so many ideas that you get so excited about, and then, one after another after another after another, they get shot down by the complexities of the process.” With furniture making, on the other hand, Jonah could design and build something fairly quickly and get immediate satisfaction. Like many of us, the frustration of his job pushed him into the shop to do some woodworking. After a couple of commissions from friends, he decided to quit his day job and take up furniture making. It didn’t take long before it became a full time career.

One of the lessons he took with him from studying and working as an architect was the beauty of simplicity and aesthetics of the connection between the different materials in a building. Likewise, his furniture is both simple and provides a lot to look at. “I try to draw a kind of beauty out of the connections between surfaces, planes, edges, different woods and joints in subtle ways,” says Jonah.

One connection Jonah incorporates into his furniture is using both metal and wood together. He uses stainless steel and aluminum in many of his “catalog” pieces, and the metal acts as a spline to join boards in a unique way he finds aesthetically pleasing (it’s easier to see than to explain, so check out the picture above). It’s a metal fastener, but not in the way you might traditionally think about it.

He prefers aluminum to steel because he can do a lot of the cutting and shaping of aluminum pieces with the band saw, table saw and sanders in his shop. Otherwise, he needs help from a couple of local machinists for some of his designs.

Finally, his tenure as an architect has also helped him build his business. He can, for example, speak to other architects who commission work from him in their own language.

Running a Small Business on the Sly

Jonah started woodworking under the tutelage of his grandfather. He would hang out in the shop and watch and learn. Later, a friend’s father was an amateur carpenter, and the kids learned how to use all the usual tools before they hit high school. Jonah did some theater construction in both high school and college, but it was in college that he discovered he could really make some money at this.

It started with a professor who wanted him to build some bookcases and cabinets. That led to requests from other professors, and friends of professors. He admits that he was essentially running a small business out of the woodworking shop owned by the art department at the college.

After college, Jonah went to work for a small furniture factory in Vermont called T. Copeland. There he learned a lot about high-volume furniture manufacturing that would stand him in good stead when he owned his own business. Specifically, Jonah says, he learned about work flow and keeping people busy. He also learned about how to make some of the more monotonous work less so, thereby helping employees to do their best work consistently.

Working in a big woodworking factory also helped him get the confidence he needed to take on bigger commissions. For example, his company took on projects that involved building 100 chairs for a school and four huge conference tables for a corporation. In one project, he and his team went through about 6,000 board/feet of cherry in one month. “During times like that, I was able to attack those projects and do OK with them because I had had that experience working in that high-volume shop,” says Jonah.