Robb Helmkamp had been doing woodworking “out of my backyard in a shed in whatever placing I was living in” before he decided “take it to the next level” and began pursuing woodworking classes in the Piedmont, North Carolina area, eventually moving to western North Carolina to study at a community college with an instructor who had studied under Wendell Castle. He already had a degree in journalism, “but I wasn’t really psyched about getting into the industry,” Robb said. With woodworking, though, “I hit the ground running in 2006 when I graduated, and I’ve been doing it ever since.” Well, there may have been a hiccup or two along the way. Immediately out of school, Robb worked as a delivery driver for a furniture company, “but they fired me because I wasn’t into it.” It all came round in the end, though, as he reestablished a relationship with the company a year or so later as a builder. In particular, he created for them four large mobile display units for glass items. Each “was as tall as a refrigerator and three refrigerators long, rolled on six wheels, and had 18 fluorescent lights that illuminated it,” Robb said. “It was really fun to figure how to correctly build it.” 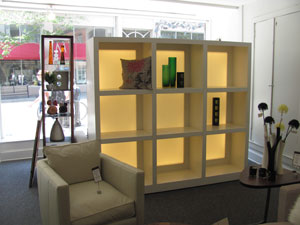 “Fun” is a word that comes up often in Robb’s discussion of his woodworking. For instance, “doing my own version of an idea is always fun,” he said. That particular characteristic “started when I was going to school. Something in me doesn’t like to make stuff that’s already been made. I like to be influenced by the past, and what’s around me — without reproducing the past.” For example, Robb at one point came across a simple meditation chair and stool and wanted to explore the form and idea, and do something “a little more complex.” He came up with the Chrysanthemum Chair, made of plywood and stainless steel. “The idea was of a low pedestal that you’d be able to sit on with your legs crossed,” he said. “A big block of plywood with a stainless steel ribbon coming out of it.” It was a complicated piece to make, with its combination of hot and cold bends of stainless steel, installed in a block of Baltic birch. “Ironically, I don’t meditate,” Robb said, “but I’m always on a spiritual quest, on a quest to make new stuff — maybe it’s all one and the same.” Also, he said, “sometimes I’ll come up with an idea that I think is reasonably simple, and it will end up being so complicated it boggles my mind.” In addition to the Chrysanthemum Chair, he says an example of this is the Biernbaum Jewelry Armoire he was commissioned to build. “I came up with the idea of a rectangle that looked like it was being pierced and sliced apart by a curve. It became a complicated series of glue-ups to create piercing laminations.” Creating laminations is one of the woodworking processes he learned early on that Robb says he frequently finds himself going back to. “I’m always doing that instead of using larger pieces,” he said, “just so I can create the shapes I want in my work.” Sometimes he uses the process to create curves in his pieces, by cutting strips and bending the wood over a jig; other times, he uses steam bending to create curves. He’s currently working on creating a curve of aluminum to be laminated and glued between two pieces of walnut for a table in his “Caught in the Cypher” series. So far, all of the tables in that series have been constructed of walnut. The design, Robb said, was inspired by a Shaker design that he “played with a little bit, lifted the tabletop. I tried to keep the line simple but graceful and interesting to look at.” (The title of the series, he said, comes from his perception of the media as “white noise, and we’re caught in the cypher or caught in the white noise of everything going on.”) Another series of pieces in Robb’s repertoire is his wooden Flyswatters. While in school, he took a class on production items. For his item, “I wanted to figure out something unique, different from trivets or bowls or something.” Each Flyswatter series, which have incorporated themes such as Tim Burton, Day of the Dead, or different carving techniques, consists of 18 to 24 wooden flyswatters — and Robb says he will likely be making more soon. “They may be resurrected at the urging of my mom and a couple of friends who are really into them,” he explained. “A couple of people collect them.”

Also, these days, Robb is incorporating more pyrography into his work. Originally introduced to the technique during a couple of classes at the Anderson Ranch Arts Center, “I initially started doing it just to see if I could do it,” he said. One aspect of pyrography he particularly likes is that it gives a piece more depth; when he burns a flower design around it, “it looks like it’s grabbing the corner of the cutting board,” he said. Images he’s included in his pyrography, on pieces like cutting boards and jewelry boxes, include flowers, as well as others: “I always like images of machines and tanks and grenades and rifles and mixing all that stuff up,” Robb said. In particular, “I’ve grown to love chrysanthemums. It has single petals, hundreds of them in a flower: simple pieces that together make a complicated form.”

Smaller, simpler pieces that add up to a larger whole — sounds like Robb’s laminations, or his penchant for seemingly simple pieces that become complex — the ones he describes as “the idea is simple, but behind the curtain it’s organized chaos to create two or three different lines.”

Overall, Robb said, “I continue to do this and love what I do and hope I can keep on doing it.”