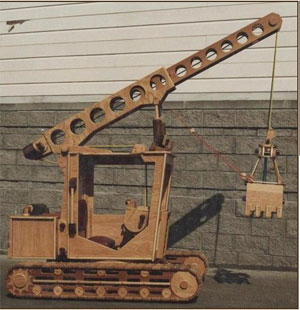 Robert Rutkowski has a background in engineering, which means, he said, that “I like machinery. When I started seeing things built out of wood that were machines, that attracted me” to woodworking.

In particular, the project that started him down the woodworking hobby road was building a toy crane for terminally ill children at a local hospital. Due to their conditions, the children need new, rather than pre-owned toys. “I’m a pretty rough character, pretty tough,” Robert said, “but I’ve got a soft spot for the vulnerable. They don’t need somebody there crying because they’re sick, but I can build ’em toys. It’s a positive thing to make somebody feel better.” Robert himself has what he terms “either or a terminal or a chronic illness; I have good times and bad times, and I’m tired a lot.” Those were influencing factors in some more of his projects: his bed, computer and TV stand — which are all connected. A dislike for box springs led him to build a platform for the bed, and the desire to get his shoes off the floor in the “multipurpose” room he uses within a friend’s house led him to add a shoe rack. He posted a photo of the shoe rack on an online forum, and received a comment: “Somebody was joking one day, ‘When are you putting the top on it?’ I laid awake all night thinking about it.”

Robert ended up adding an I-beam trolley on slides to the top of the bed. After building it, he moved his “underbed” plastic storage boxes to the top of the structure. Also attached are the computer and TV stand that allow him to sit on the bed and eat while watching TV, or to push it the other way, and to have the computer available whether he’s lying down orsitting up. “I’m not really big on woods for my home,” Robert said. “I’m a minimalist; I like modern stuff. That’s probably why my bed looks industrial. I would never set off to make a Shaker bed.” To get his materials, Robert goes to places like a rebuilding center, which resells materials salvaged from old homes and buildings. “It’s a cool thing to do; you can get straight-grained old growth lumber, even studs out of the wall of old houses.” Also, “I use a lot of manmade materials.” While, in his assessment, “Particleboard cuts well because it’s mostly air,” and is readily available, “my dad and grandpa wouldn’t even call this stuff wood.” Robert’s grandfather, who did intricate woodworking in Midwestern bars — including building speakeasies during the era of Prohibition — ran a sash and door company in Kansas, and his father, after retiring from the military, worked as a general contractor and running a hardwood mill in California. “I don’t have the talent he did,” Robert said. “We never called a skilled craftsman to our house. I just happen to know how it’s done.” Until he built his crane, Robert said, woodworking had not been a favorite hobby. “Then, I got to enjoy it more. It’s a challenge to make things that are machine-like out of wood, and it’s an opportunity on a low, fixed income to have things that I wouldn’t have, and to build to my taste.

“I make things that are whimsical, off-the-wall, and approach it kind of like I would metalworking, with a lot of jigs and fixtures.” Robert has built a circle sander and, most recently, is working on building a cabinet frame, Biesemeyer-style fence — and possibly more — for his table saw.

“I’ve got a million projects I’m working on in my head,” he said. “It is fun to do, there’s no question about it. And it’s fun to share what you get with people.”