About 20 years ago, Ted DeMers was diagnosed with a chronic illness that led to his leaving his job as a furniture company service manager and starting his own business as a woodworker. It’s ironic, he says, that after one of his surgeries for his Crohn’s disease, in which he has had “my insides taken out,” he comes home and “puts things together” to build furniture pieces.

“I spend a fair amount of time reflecting on what we have to be grateful for,” he said. For instance, he’ll spend time in the woods — easy to do, since he lives on an 18-acre wooded property in northeastern Connecticut. With its rolling hills and its rocks, including 3,000 linear feet of stone wall, the property was most likely a 19th century sheep farm. Its forests are dominated by hardwoods, which now serve as Ted’s primary source of lumber. “We’re fortunate enough to have a little bit of everything,” Ted said. That includes maple, ash, a few red oaks and hickory he uses for firewood. When walking the property with a University of Connecticut forester, Ted discovered he had some slippery elm as well. “About five years ago, we took down a butternut. It was gorgeous even with the blight,” he said.

And he has a small grove of chestnut trees. Many of the stump-sprouted saplings only reach the size of a man’s thumb before dying, Ted said, but a few grow to 6 or 8 inches before succumbing to blight. The chestnut trees are the first to drop leaves in the fall and the last to grow them in the spring, Ted said, “but they’re still producing nuts.” 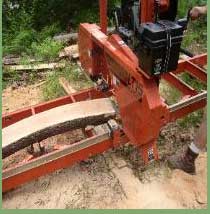 When it comes to building, Ted said, “there isn’t a wood I don’t like — although there’s a few I stay away from.” For instance, he once built a couple of sofa tables, a corner table and an end cabinet out of hickory. Although there may have been some satisfaction in naming the end cabinet after the former sawmill owner who had told him hickory wasn’t good for “anything except railroad ties and ax handles,” still, “it really beat the band saw up.”

Beat-up band saws notwithstanding, when he can, Ted prefers to do his woodworking with traditional hand tools, such as hand planes. In part, that’s because he can’t watch the Western channel when his power tools are running. Sometimes, however, time constraints don’t let him use the slower methods that go with his “back to the land” life, in which his house is heated with wood from his property, and venison and wild turkey dinners also come from his land. Ted and his wife, Cyndi, the “CEO and president” of his operation, do a lot of shows in the Northeast, and he needs to have pieces for sale. While he did a lot of restoration work for about the first five years of running his own business, and followed that with several years of traditional desks, bookcases, etc., about five years ago he began making “funkier” designs. “I fell in love with the work,” Ted said. “It was selling quickly, and more people liked it.” The funkier work has included a table made with curly cherry and birch saplings, and a sofa table with a bitterroot pedestal post. The basic sofa table design — a slab with a twisted piece in the middle, with different things on the platform — is one that Ted has repeated and for which he’s won awards.

His new philosophy, Ted says, is to “use the wood as whatever it was gonna be.” For instance, instead of forcing a piece of wood into a certain design, such as gluing up pieces to make a coffee table top, “I’d just as soon find a big enough, beautiful enough piece of wood to be the coffee table.” This philosophy is very similar to that expressed by George Nakashima in his classic book, The Soul of a Tree, which Ted read around the time he was switching to this type of work and described as “a phenomenal book. It’s like he stole all my ideas, 25 years ago.”

Ted enjoys the work he’s doing so much that his comment about the pieces he takes to shows is, “Unfortunately, you have to sell ’em.” Sometimes, if he brings a new piece, “I feel a lot of people are cheated if I bring it to a show and it’s sold right away, because nobody else got to see it.” One piece in particular that got away was a bench that “my wife still yells at me for not keeping,” made from a maple log purchased from a sawmill owner who had salvaged it from old log drive woods at the bottom of the Kennebunk River. The ends of the bench were each a half piece of the crotch of a walnut tree cut down by a local town that Ted arrived, with help recruited off the street, in time to salvage a part of. “It’s beautiful bench,” he said.

With that piece and others, “It’s the kind of business where I guess you have to enjoy it, and I enjoy the heck out of it,” Ted said.